And Nothing Else Matters

Bangalore. The D-Day finally arrived as the Master Of Puppets landed in Bangalore. After the huge fiasco in Gurgaon where the organizers and crowds provoked St. Anger in the heavy metal band and crew, the show was cancelled. A regrettable incident – Sad But True. However, the organizers with their Holier Than Thou attitude didn’t learn from the mistake as chaos reigned at Palace Grounds, Bangalore the venue for the band’s second rock concert in India, as the local media went ballistic in their very own versions. 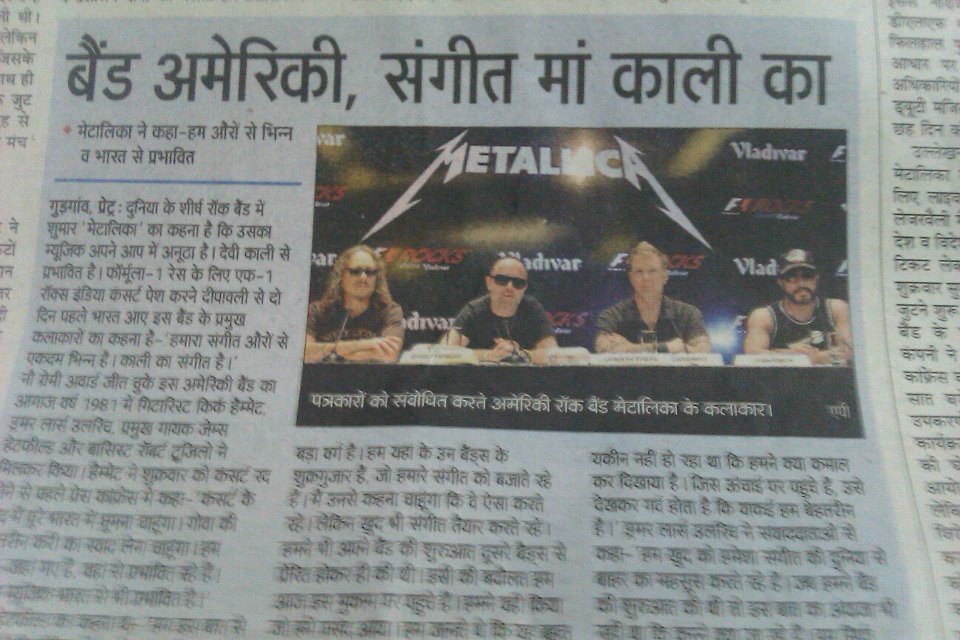 Earlier in the morning I took out my old torn (I did it myself) jeans from the closet, which had seen many rock shows including the Iron Maiden show some years ago. After much dilly-dallying I decided not to wear it as it had become a relic (or was it me?). After negotiating hard with my friend Saniel (a hard core fan) who wanted to be there at 12 noon, we eventually landed there at 2 p.m., a good two hours before the gates opened and 4 hours before the show was supposed to start. But obviously we were not the only ones who thought of coming early as fans had already formed long serpentine queues. Lack of security and confusion was soon becoming the order of the day. However, the crowd was the Hero Of The Day as this disorder wasn’t able to dampen their spirits. They didn’t want this D-Day to be The Day That Never Comes, a repeat of Gurgaon and were at their behaviour best. They even went to the extent of reprimanding the potential troublemakers amongst them. Just love Bangalore rockers for this – something that Delhi/Gurgaon (no offense, but hey!!) could learn from. 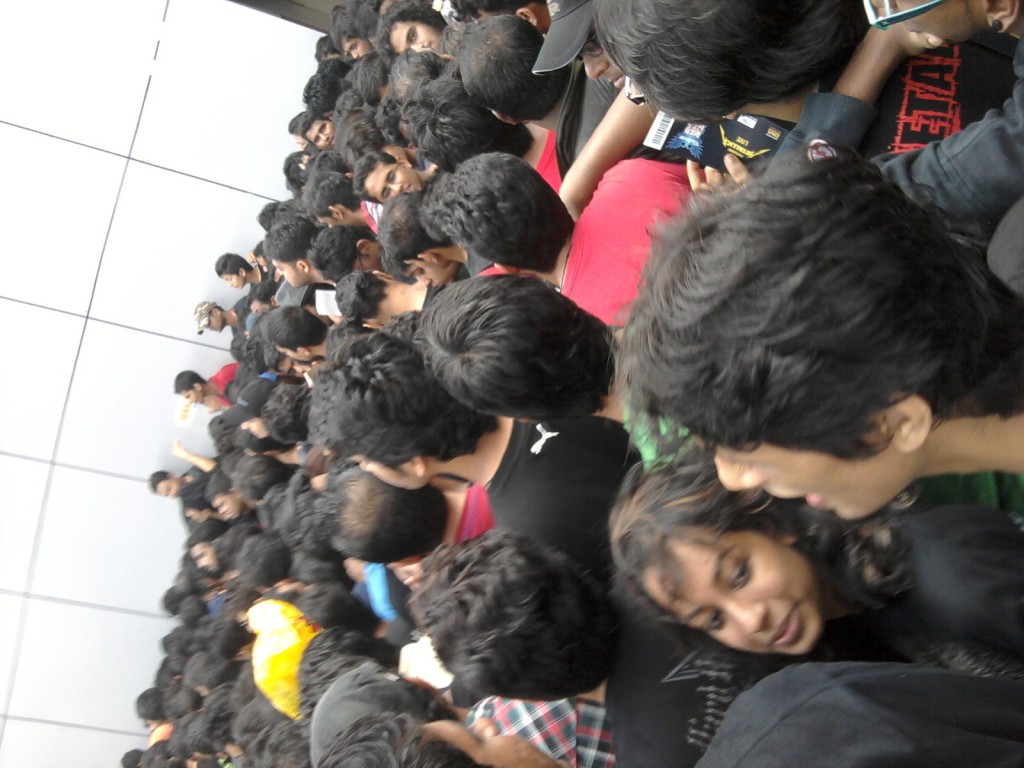 We finally entered the grounds after having numerous sweat baths together with the other fans waiting at the gate. We were late enough to be right at the front (much to Saniel’s disappointment) as we made our way into the second enclosure, a good 50 m away from the stage.

Yesterday’s heavy rain had taken its toll as organizers had tried to cover the damp muddy grounds with a thin cover of green carpet (hardly effective) to give an effect of grass. And grass we smelled all around as whiffs flew in from all directions.

The opening acts, Inner Sanctum (from Bangalore) and Guillotine (from Delhi) were heavy no doubt, but we just couldn’t get it. Biffy Crylo, a Scottish band, the third and the final one in the list of opening acts started promisingly as the crowd went berserk head banging. They played for almost an hour as the crowd including me grew restless wanting Metallica to start soon. 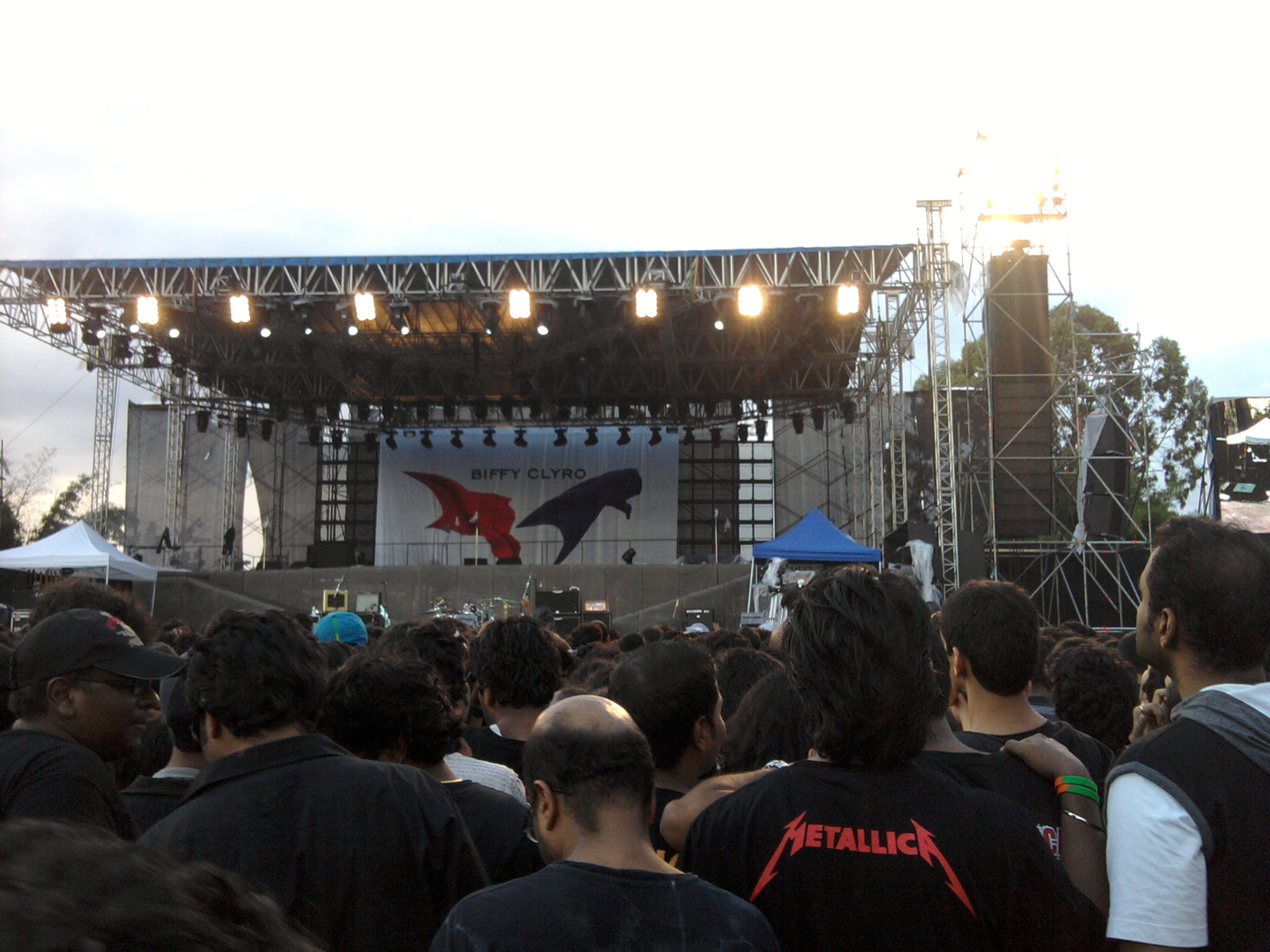 The crowd had really swelled all around and we just barely stood with the suffocating support from the fans around. These fans had waited long for Metallica to play in India, in Bangalore. However, most of them were not even born 30 years ago, when the band was formed in 1981. The average age was more than a decade younger than that. Awesomely young kids, I thought (or is it just me?). As Biffy Crylo finished playing we decided to move back further away from the stage. With much difficulty we made our way out through the crowd much to the ire of the fans we pushed and shoved as we went by and we heard among the silent expletives thrown towards us – “there’s no place to move, SIR”. Thank God, nobody uttered the dreaded “U” word – Uncle (still have it in me, I guess). 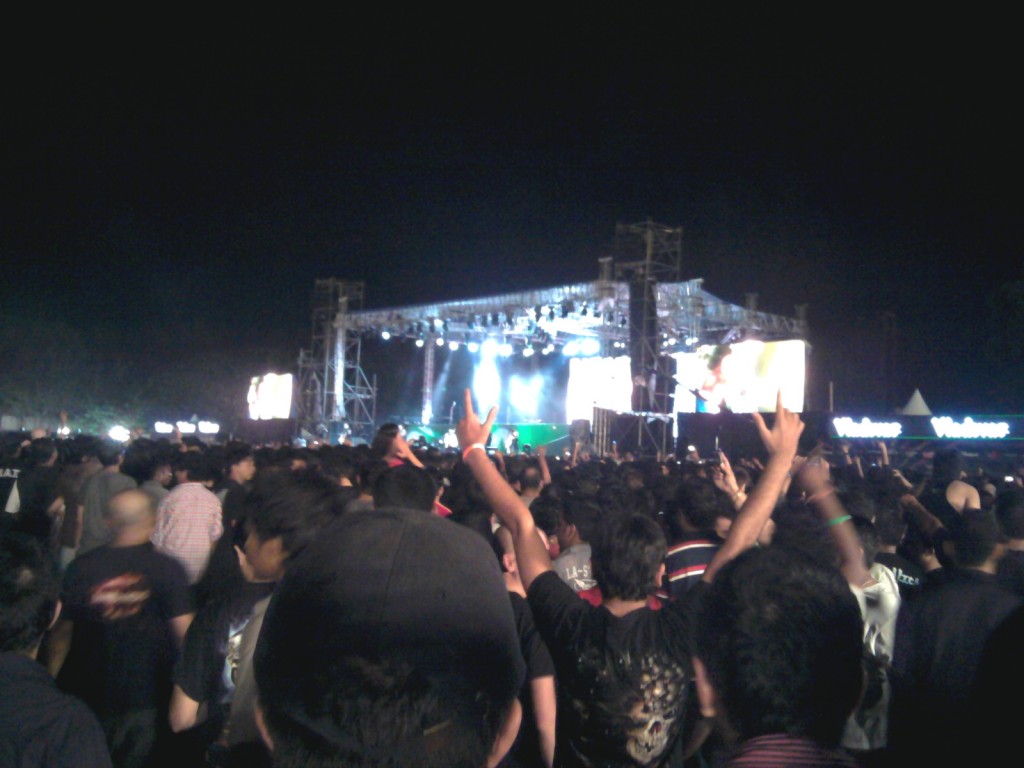 And we were glad that we moved back into the third enclosure as we met Ronnie, Kenny, Jerry and gang. There was also a better view of the stage from there with lots of fresh air around as well although still mixed with the intoxicating whiffs of marijuana and vodka. In spite of the heavy(?) security, fans had managed to smuggle in the “essential items”.

After getting ripped off for the Chicken rolls and Pepsi we waited with our lighter wallets at the enclosure waiting for Metallica to start as the band’s security in-charge controlled the crowd with his “safety first” diktats, a bit overcautious and irritatingly patronizing, I thought.

As the white daylight slowly turned to Fade To Black, we saw Lars Ulrich enter and stood posing mischievously near his Tama drums as the crowd erupted. The rest of the band followed suit and the show had begun. The grey ominous clouds overhead threatened yet another repeat of previous day’s downpour and thunderstorm, however the fans stood and head banged unfazed, buoyed by the band’s intent to Ride The Lightning.  Lead guitarist, Kirk Hammett a Joe Satriani prodigy was at his best as he led the Battery of high pitched riffs, while James Hetfield the incorrigibly talented front man connected with the crowds with his smooth, yet high energy vocals. However, it was the newest member (8 years in the band) Robert Trujjilo who stole the show as he went spinning and running around the stage and performing a masterful solo with his bass guitar.

The Bangalore crowd close to 50,000 now (though the official figures say 40,000) welcomed Metallica with their frequent cheers, applause and the devil’s horn knuckle-symbol. The band echoed their fans’ sentiments with Welcome Home (Sanitarium). And it rained as the fans welcomed it as blessing from up above. Chaos, confusion, crowds, sweats, long queues, of course great music and now the rain – the rock show was now a complete success. 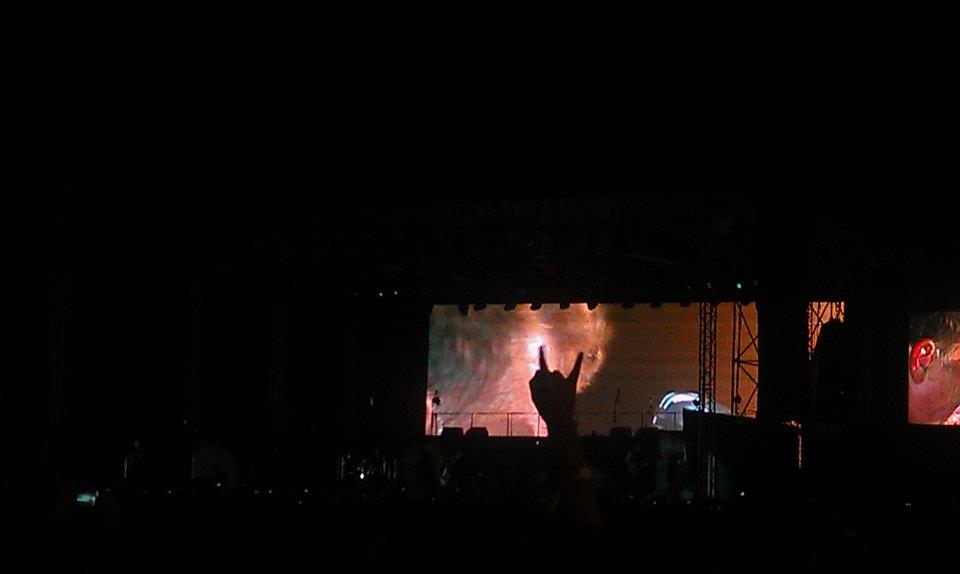 The fake Ra.One was quickly forgotten as the band bit the Cyanide and crooned the original One. As the clock ticked, and it was time for Sandman to Enter, but nobody was in a hurry to Hit The Lights as yet, including the band as they played enthusiastically for more than two hours straight.

Finally, after the many predictable last songs and with crowds chanting “we want more” the show came to an end as Metallica promised that they will be back soon.

There was genuine happiness and involvement from the band as Hammett and Trujillo threw their plectrums at the crowd. And there was Justice For All including the untiring and unfairly unpopular cops as Ulrich gave one of his drumsticks to one of them. 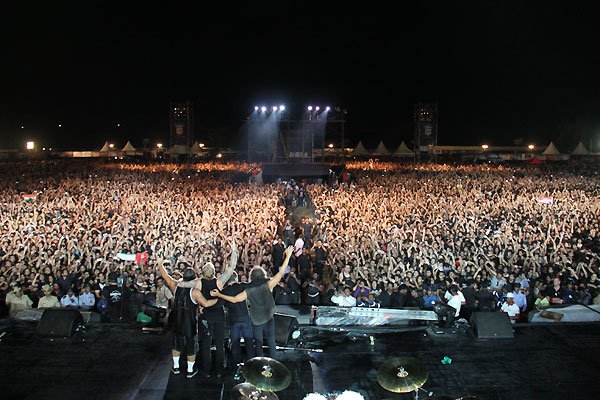 As we went back with our shoes soiled in mud, clothes completely drenched, aching muscles (something we didn’t know existed) we knew that this awesome experience will be treasured as long as The Memory Remains.

For those who missed out are The Unforgiven ones. I know one thing for sure that Wherever I May Roam I will be there with all the fans when the band will be back coz’ when there’s Metallica…Nothing Else Matters.