Everyone wants to be happy. But what happiness really is?

What makes you happy?

We decided to find the answer, where else but in Bhutan, officially the land of happiness.

It all started with the long-term desire each one of us had to visit Bhutan. Yes, of course apart from the famous Gross National Happiness Index that the country is known for there were other attractions as well – the Himalayas, the culture, cuisine, people, monasteries and many more waiting to be discovered.

Fortunately, for me, and you can say conveniently as well, visiting Bhutan was part of work. I had logged out of a corporate career few years back and went about finding myself, following my passion, dream and all fashionably cool (but financially uncool) things. All this resulted in starting Rustik Travel, an experiential travel company.

It so happened that Aparna and her husband Sanjay both fellow IIMB alumni reached out to us to curate a travel experience for them and their family to Bhutan. True to the brief we created an offbeat itinerary and they were all set to visit the country.

Caution: The brand mention is a bit necessary to set the context. More ahead. Though, purely coincidental and unintentional. 😉

Now Rustik Travel is focused on sustainable travel that engages with the local communities creating livelihoods, protecting environment and preserving culture. And apart from curating travel experiences, the organisation is involved in many such related activities. Creating content, read making short films and documentaries on related subjects is one of such activities.

Kranthi, a fellow IIMB alumnus, Rustik Traveler and a budding travel documentary filmmaker jumped at the idea of making a documentary on the subject of happiness in the land of happiness.

So armed with this ultimate question both of us set out to Bhutan around the same time Aparna and family were visiting but with different itineraries. 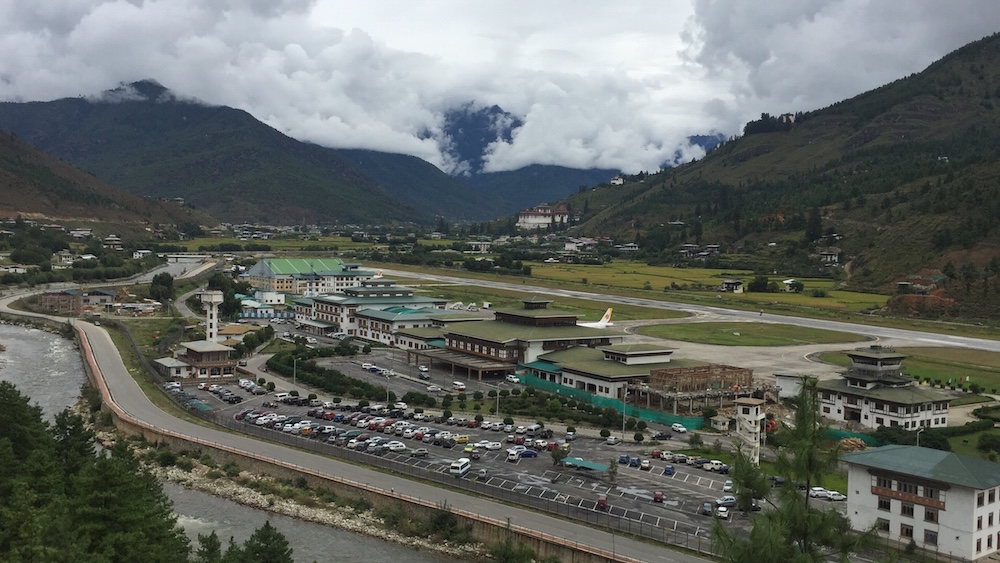 There are two ways to travel to Bhutan from India – by air and by road. We decided to fly into Bhutan in Paro and drive out into India through Phuentsholing (bordering West Bengal). Our flight took off from Kolkata and we flew through the clouds next to the snow capped Himalayan peaks of Bhutan and peacefully descended into Paro. The airport with its short runway was nestled amongst the mountains. Precariously beautiful I’d say as we remembered that Paro airport was one of the most challenging airports in the world to land. Well, we landed all right thanks to the trained Bhutanese pilots.

Disclaimer: Not to be attempted without expert supervision.

The airport was built in traditional Bhutanese architecture and decorated with local motifs, as most of the buildings in Bhutan as we discovered later. Such regulations have been put in place to preserve the local heritage and culture. Traditional dress (Gho for men and Kira for women) is also compulsory for all during working hours.

Outside the airport, we were greeted warmly by Jeewan dressed in Gho, who would be our driver for the trip. We reciprocated by asking him the ultimate question capturing his reactions on camera as he fumbled for answers.

As we drove from the airport to Haa Valley, we discovered that Jeewan actually owned the taxi service and that he studied in Australia for his MBA. Master of Bad Activities he insisted was the full form. We were not exactly in disagreement recalling our MBA days that included bunking classes and …….

Disclaimer: Apologies from the editorial team for censoring the previous statement. Totally intentional.

Haa valley is a relatively offbeat yet one of the most scenic places in Bhutan. We drove through the Pine, Rhododendrons and coniferous forest through the misty and cold Chele La pass (3988 m) to descend into the valley. We were staying in a traditional homestay as we did for the rest of the trip. Living with a family in their home is the best way to experience the local culture, cuisine and it also helps the family financially. Sustainable Travel in practice.

We also meet and interact with like-minded fellow travelers apart from the family. Most importantly, we get to inflict our ultimate question on them :).

And it did have the desired effect as the group was on fire during dinner. Though I must admit that Ema Datshi, the national dish of Bhutan (spicy mix of the most hot chillies and cheese) also did contribute. 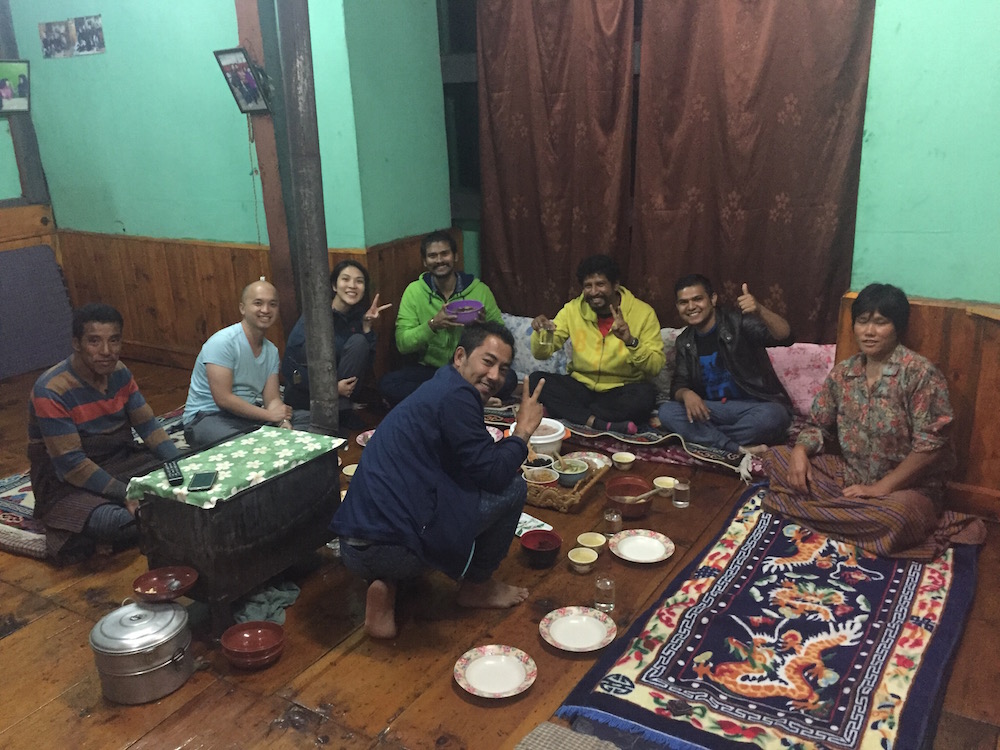 The hotness of the chillies did help in the cold as the next day we went out exploring the valley. We went on a hike to Jamtoe Gonpa, the most prominent monastery of Haa. The place was bustling with the Indian army primarily because Haa was only 61 km from the China border (and also the Doklam stand off was still fresh). The homesick jawans were happy to see us but evaded the ultimate question blaming it on the army protocol. However, they showed us the way to the monastery. 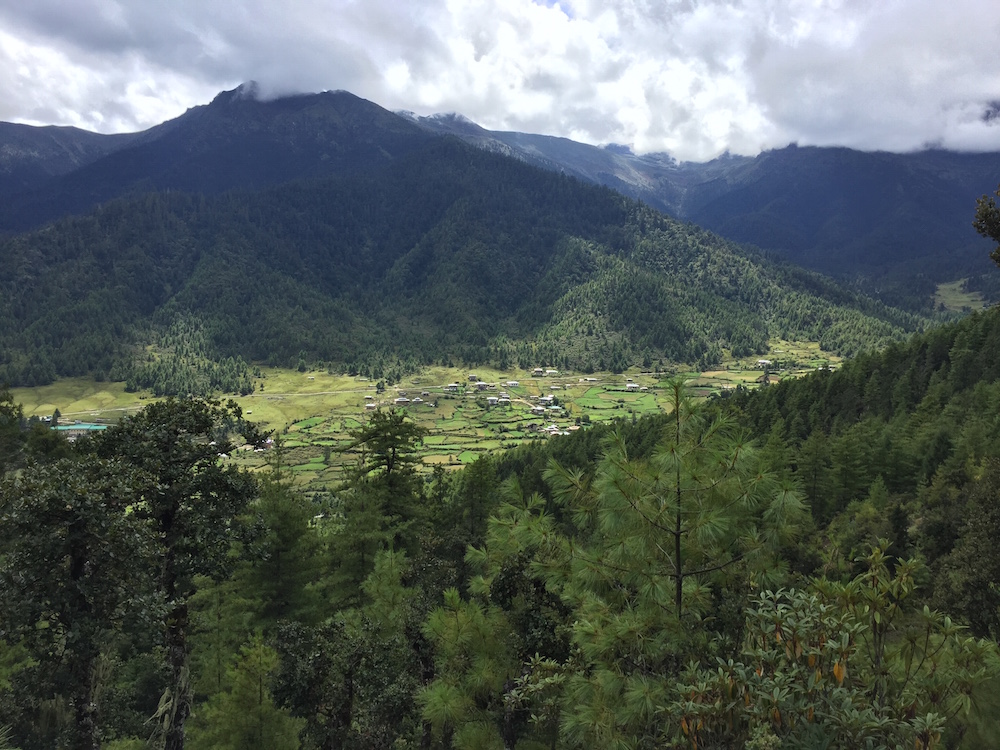 After entering the thick coniferous forest without any marked trails we were hopelessly lost and we came across two diverging paths. We were in dilemma as to which path to take till we remembered David Frost’s poem – Road Not Taken.

Two roads diverged in a wood,
And I took the one less traveled by,
And that has made all the difference.

After much pondering on the poem and the situation at hand, we decided to do the opposite, taking the path that was more tread upon. Fortunately, that made all the difference as we eventually found our way to the main trail leading to the monastery.

Moral of the story: In real life, don’t take the inspirational quotes literally (esp. the ones shared on social media). 😀

After failing miserably in the national sport of Bhutan, archery and darts while playing with the locals we left for Paro, feeling a bit unhappy in this land of happiness. 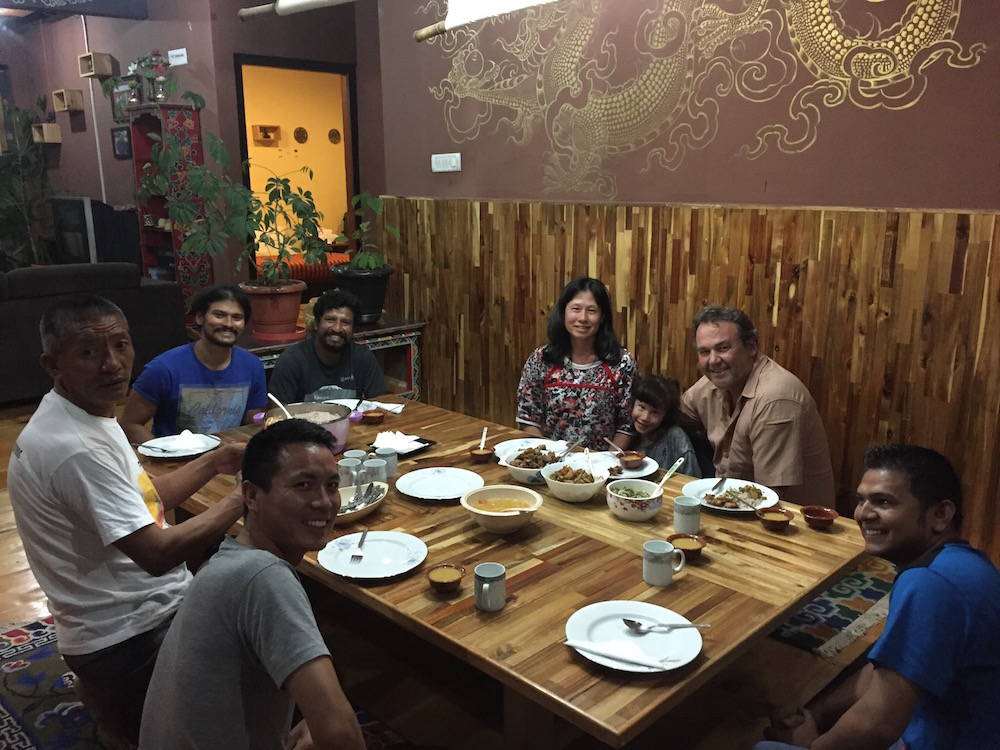 At the homestay in Paro, yet again we had a delightful discussion with a family from Vancouver, Canada on the subject of happiness esp. in the era of war and Trump. That conversation left us in high spirits literally and the hangover gave us an extra impetus to trek up to the Tiger’s Nest (Taktsang Monastery). Legend has it that Padmasambhava (Guru Rinpoche), who introduced Buddhism to Bhutan, flew to this location from Tibet on the back of a tigress from Khenpajong. The monastery itself was worth the hike with some breathtaking views as we managed to capture a few.

We had a field day at the hike as we bombarded the hapless and unsuspecting hikers with the ultimate question and extracting some really interesting answers.

Later in the day we drove to Thimphu where we met up with some friends from Bhutan for dinner (without chillies this time :)). We also met up with a Rinpoche (re-incarnate monk), who would easily be one of the coolest monks we have ever met. He took us around showing the Thimphu’s boisterous nightlife, which is otherwise invisible to any ordinary tourist. 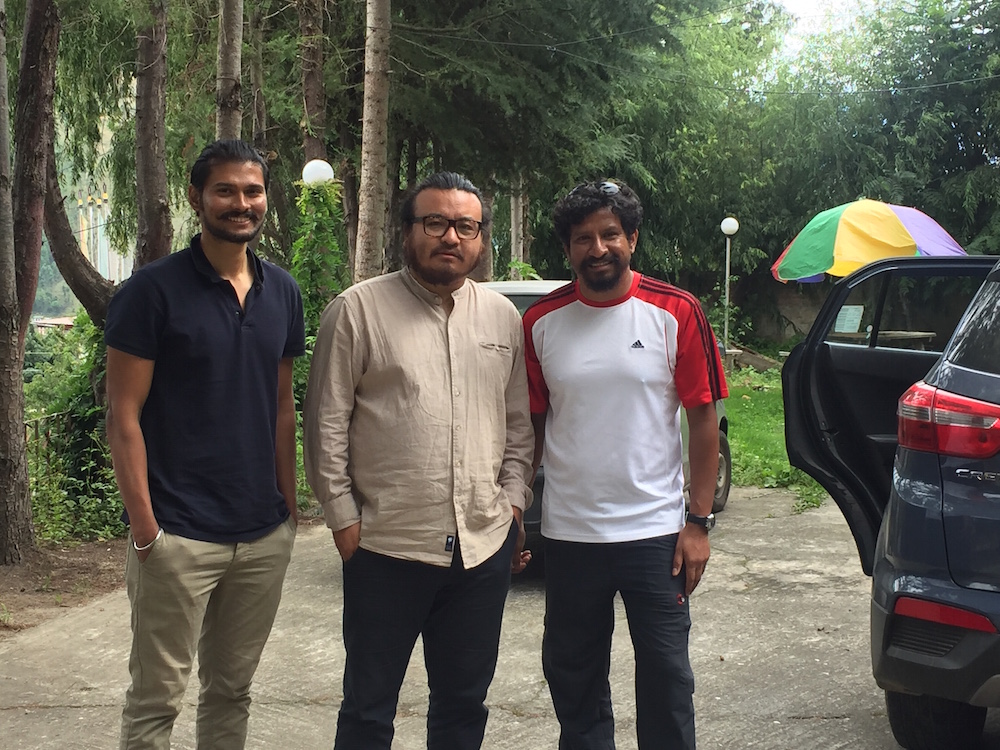 The next morning we met the same Rinpoche in his meditation centre albeit in a more sober and serious demeanor. He explained that his unorthodox behavior was a way to access and reach out to the wayward youth who he was trying to reform. He quoted the example of the Bhutanese saint Drukpa Kunley, a crazy saint who was utterly devoid of all social conventions. Kunley’s intention was to shock the clergy, who were prudish in their behaviour and teachings of Buddhism. He propagated the legend of painting phalluses on walls to drive away evil spirits and came to known as the fertility saint. 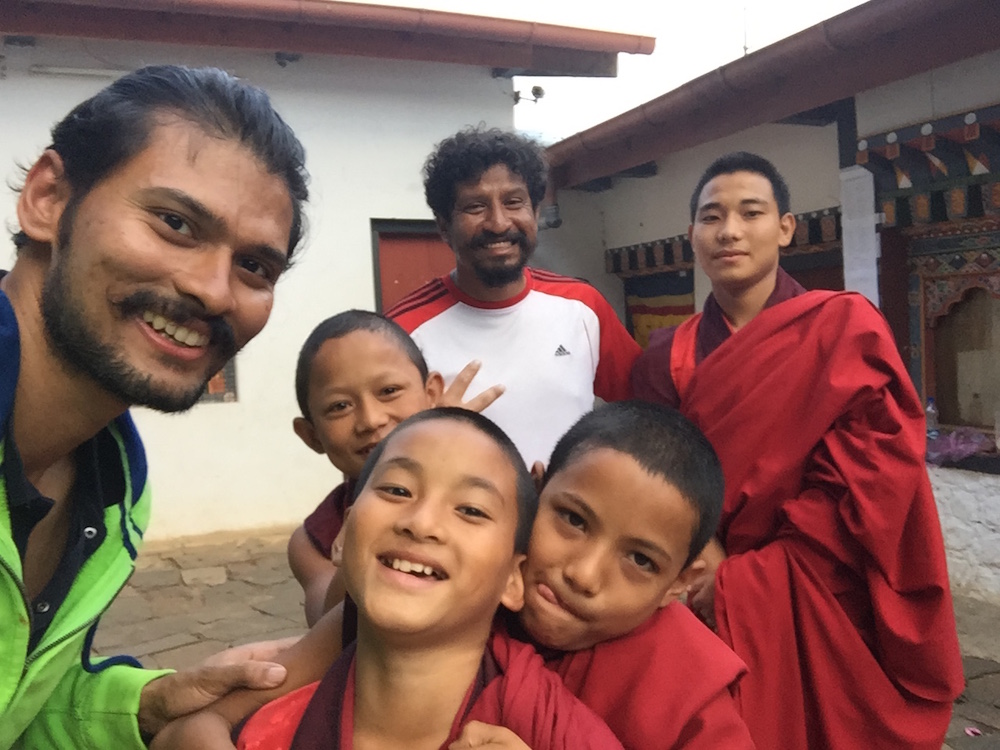 Later in the day we visited Chimi Langkha, a monastery he built in Punakha, in the 15th century, which is still visited by women across the world.

While in Punakha, we visited the beautiful Dzong (administrative office), which is scenically located next to the confluence of Male (Pho) and Female (Mo) rivers. 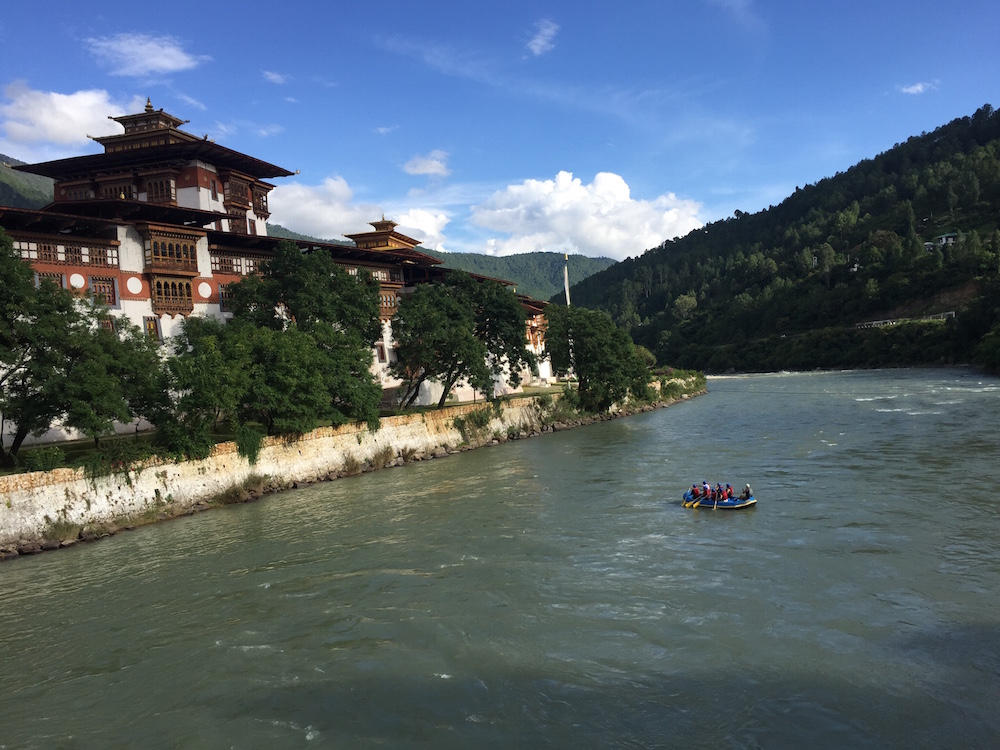 It is a beautiful setting for white water river rafting. 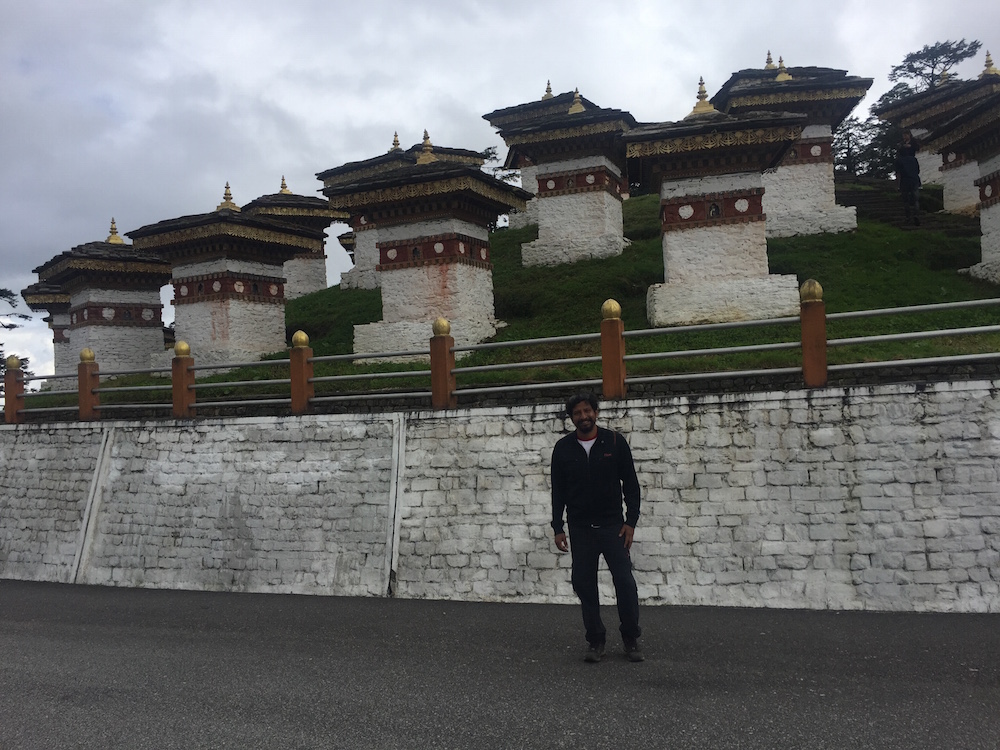 The next day we started our long drive to India via the border town of Phuentsholing. We stopped over at Dochu La pass, which has 108 memorial chortens symmetrically aligned. It is a beautiful place indeed. We stopped over at Thimphu to meet Aparna, Sanjay and the kids, who incidentally had missed their flight so had to take the one next day. 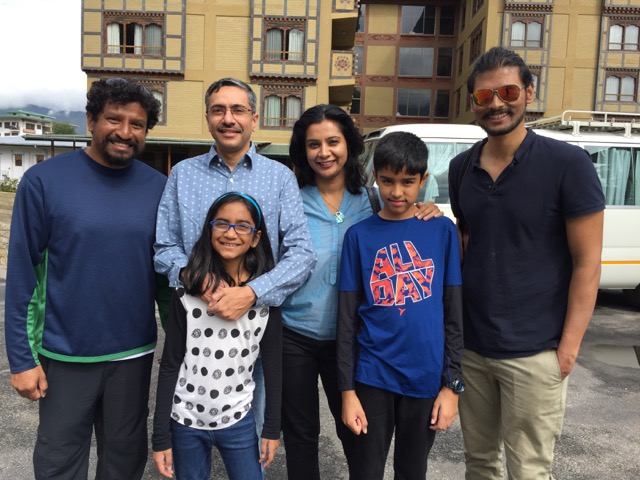 We finally had our mini IIMB alumni meet as we shared stories of our travels.

“Happiness is only real when shared.”
– Christopher McCandless, from the movie Into the Wild.

Following is the teaser of the documentary (coming soon) that we shot in Bhutan:

This post is also published in the IIMB newsletter in the following link:
http://newsletter.iimbaa.org/alumni-story-in-pursuit-of-happiness-iimbians-perspective-from-the-land-of-happiness/