Circa 13 BCE: Somewhere in the present day South China Sea near the Mekong Delta.

2 out 3 ships that left the shores of the present day Kanyakumari, India towards the Far East are missing, presumably sunk, after they encountered a typhoon. The heroic mission blessed by the king himself to find new land, trade routes beyond Siam was now in jeopardy. The sailors are tired, weary and scared.

However, hope comes in the form of a shout.

“Land ahoy,” the boy shouts from top of the mast.

The captain along with the Priest run towards the bow of the ship to see some semblance of land. This is the only chance of finding rest and fresh supplies.

“Hope we do not run into hostile natives? Will we be safe?” First mate remarks.

The captain looks at the Priest, a Vaishnav (worshipper of the Hindu God Vishnu) for support.

“The signs are ominous captain.” The Priest warns.

“We have no choice. Lord Rama and Hanuman are with us.” Captain Jayavarman replies and orders the first mate to head toward land.

Ok. Ok. This is just a figment of my imagination. But you never know something like this might’ve happened many centuries ago.

So, what does Cambodia prompt in one’s mind?

None of the above, I am sure. But, torture and genocide during the Pol Pot regime, the killing fields, poverty and little bit of economic resurgence and yes, Angkor Wat the ancient Hindu temple. Right?

At least that was the case for me. This was what I used to think when before entering Cambodia and while the facts remained, the perception changed and how.

Cambodia (or Kampuchea as it was in our school text books) had a glorious history with periods of dark ages, imperialism, civil war, and recently a bit of peace and stability.

October 2013 CE: We flew into Phnom Penh and flashed our e-visas to get into Cambodia. Isn’t that a relief esp. when you are travelling on an Indian passport? We had done much research online and booked online as well, the country seemed to be responsive and Internet friendly (we will find more about that later as there is free wifi almost everywhere) as well. Thanks to the advanced booking we were picked in a vintage Jaguar (the car that is…cough!!).

While riding through the city, it looked like any developing country (like I see in India) with construction, traffic, noise and crowds. There were lot of cyclists and two wheelers.

A country emerging from the chaos and war.

Definitely a country on the move. 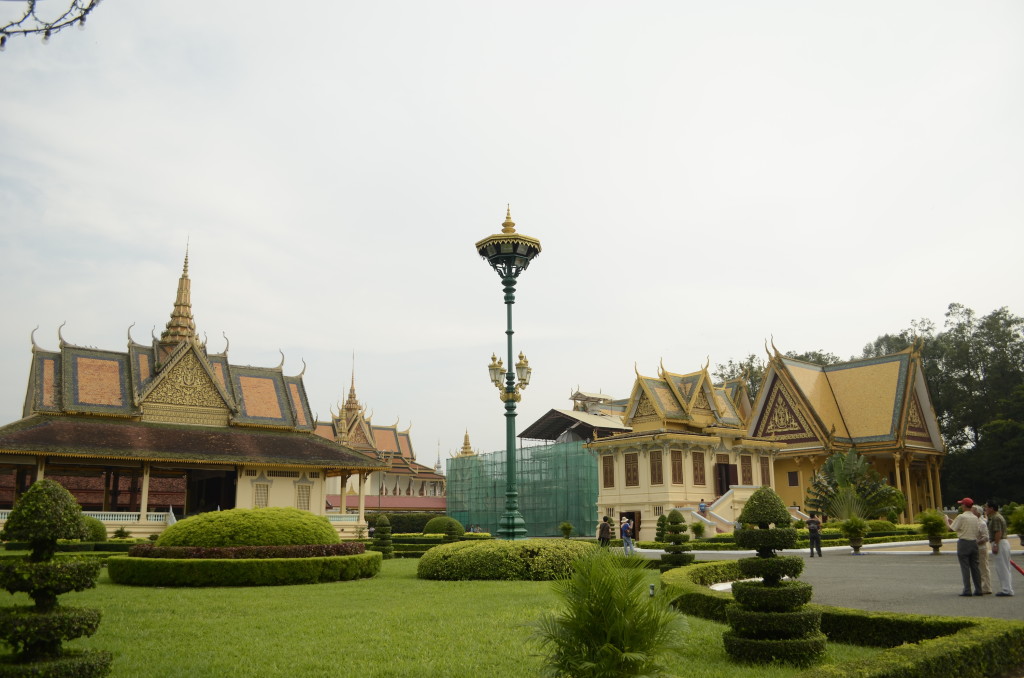 The hotel was in one of the narrow lanes, close to the Royal Palace. We had a very warm welcome with very cold and tasty passion fruit juice (and since then I have become a lifelong fan of this drink).

The polite hotel staff briefed us about not to travel alone in the evening, keeping wallets close to ourselves in case we get mugged (though nothing untoward incident happened throughout the trip).

The best way to get around is in the Tuk Tuks and that’s what we did. And we straight away went to the riverside and found the highly recommended FCC (Foreign Correspondents’ Club) at Sisowath Quay. This is not an exclusive club but a great place to eat, drink and hangout with an amazing view of the river. FCC has one of the best Fish Amok dishes in Cambodia. That I realized as PB devoured it succinctly with one tiny morsel coming my way. My dish was a disaster. 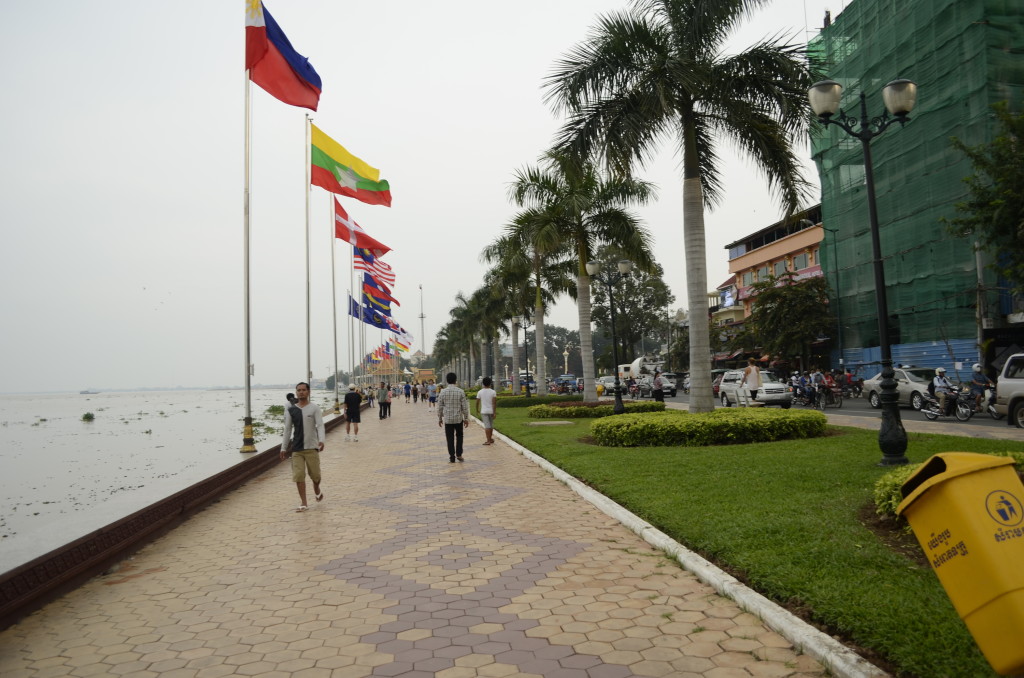 After lunch we took one long tour of the Royal Palace, digesting the awesome food we had. Including the two magnificent pagodas in the Palace Grounds, the Silver Pagoda and the Temple of the Emerald Buddha, are among the few public buildings in Phnom Penh really worth seeing.

After a quick snooze in the hotel, we went around looking for a place to hangout and eat. Street 240 is a great place for nice restaurants – Chinese House, Yumi, Java Café, Ocean, Aria d’Italia etc. but we found ourselves back in Sisowath Quay, the happening part of town.

The next day we took a tuk tuk and went to the Tuol Sleng Genocide Museum (S-21 Prison). This was a school converted into Cambodia’s most important prison in 1975 during the Pol Pot’s Khmer Rouge regime. More than 14,000 prisoners were tortured here before killing them here or at the Killing Fields. Only 8 prisoners survived. It was the most disturbing and gut wrenching experience of my life as we went through the prisons, the torture equipment and more. 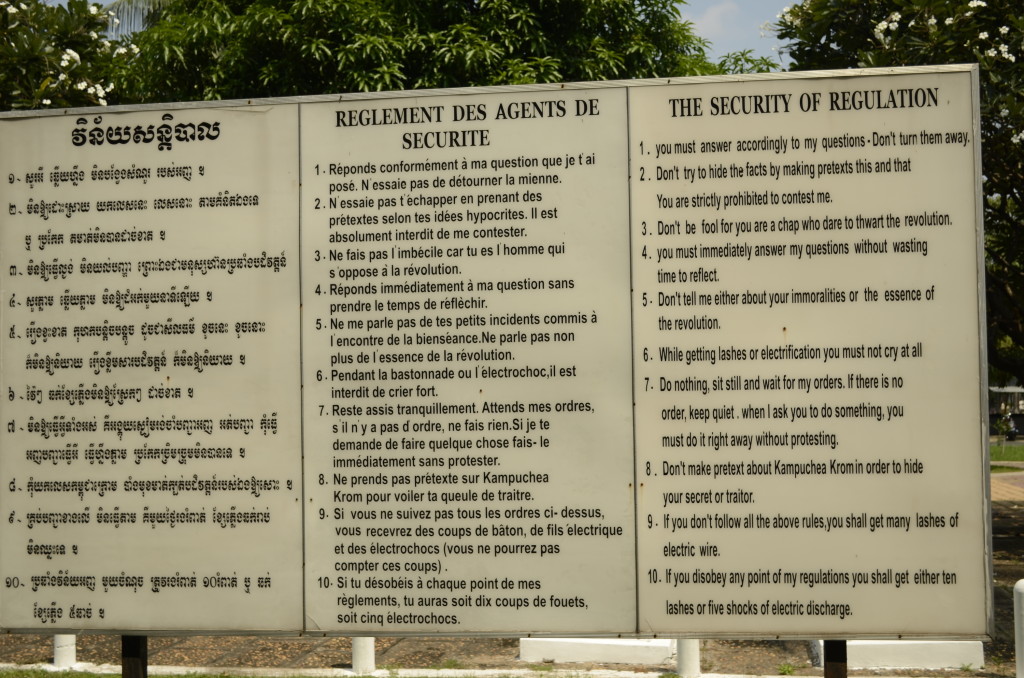 It was so disturbing that we decided to skip the Killing Fields.

Instead, we visited the National Museum of Cambodia that houses an excellent collection of art from Cambodia’s “golden age” of Angkor, and a lovely courtyard at the centre. Armed with this bit of knowledge, later in the evening, we flew in to Siem Reap, the land of Angkor Wat, and the ancient Hindu temples.

A land soaked in religion, spirituality and holiness.

It turned out to be a land soaked in something else when we went to the Pub Street, Old Market in the evening. The nightlife was really happening. And as luck and coincidence and fate would have it, one of our friends from Bangalore was in Siem Reap at the same time with his colleagues. And thus the party began.

We met Bun Hak, our guide, the next day. Immediately, we took a liking to him. He was earnest and sincere as he took us around for the next three days to many temples and places in and around Siem Reap. He had an amazing knowledge of the region, the history and culture. And he started with the name itself.

The name Siem Reap literally means Siam Defeated. This is where Thailand was defeated trying to attack the Khmer empire through the Tonie Sap lake many centuries ago. 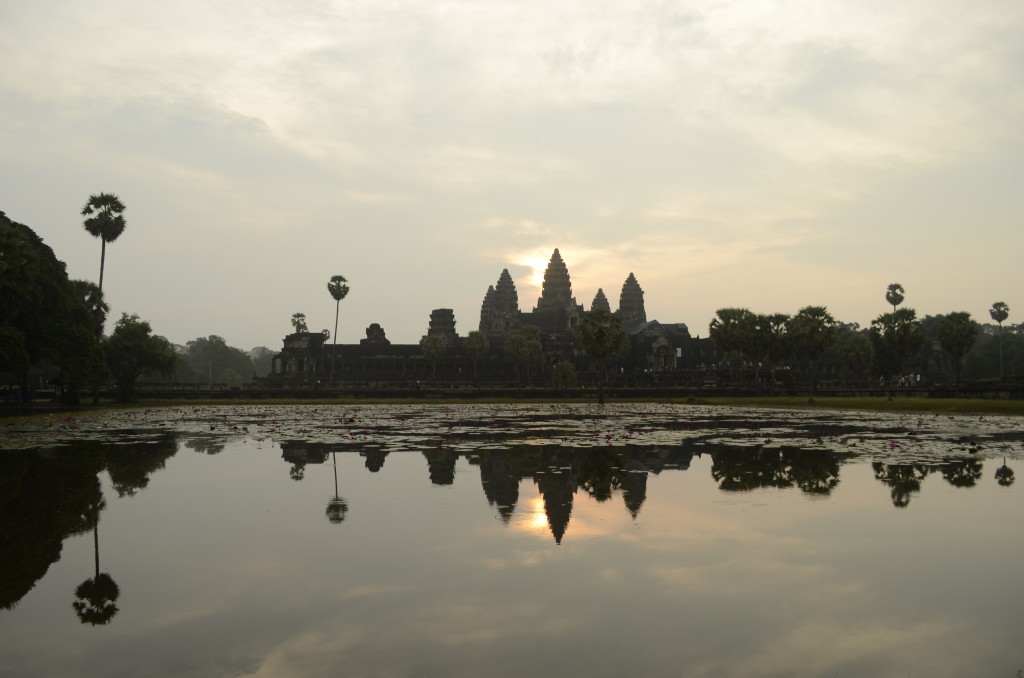 Angkor Wat, the most famous of them has been restored well (though still in the process). The temple was built by the Khmer King Suryavarman II in the 12th CE. The temple was dedicated to Lord Vishnu (unlike the other temples in the area that are dedicated to Shiva). The temple is a classical style of Khmer architecture with major influence from Kalinga architecture. There were engravings from Mahabharata, many of them looked familiar because we know the story. Angkor Wat is very important to the Cambodians. Not only it is a symbol in their national flag but also because of its popularity there are close to half a million tourists who come Cambodia.

I thought Angkor Wat was the only temple in the region. The Siem Reap province has more 800 ancient Hindu temples (that are more than 1000 years old) out of which most of them are in utter ruins. In fact, tree roots were sort of unrooting them 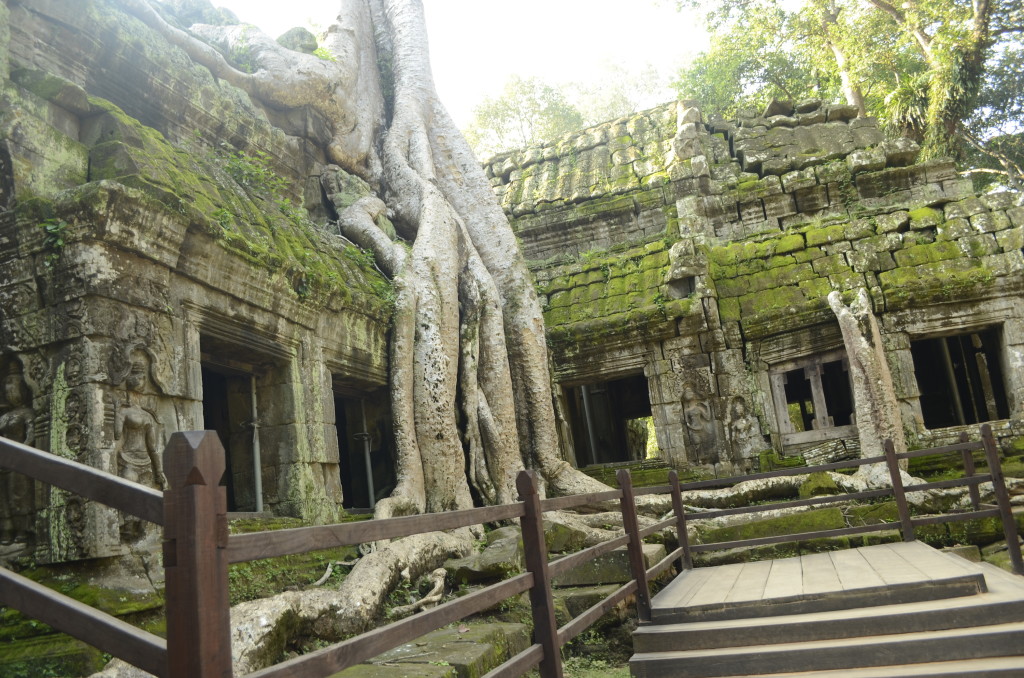 Many of these Hindu temples had huge Buddhist influence esp. after its advent in the country. Looking at these temples and monuments, one could guess how prosperous the country was at the time (and errr… religious ??) 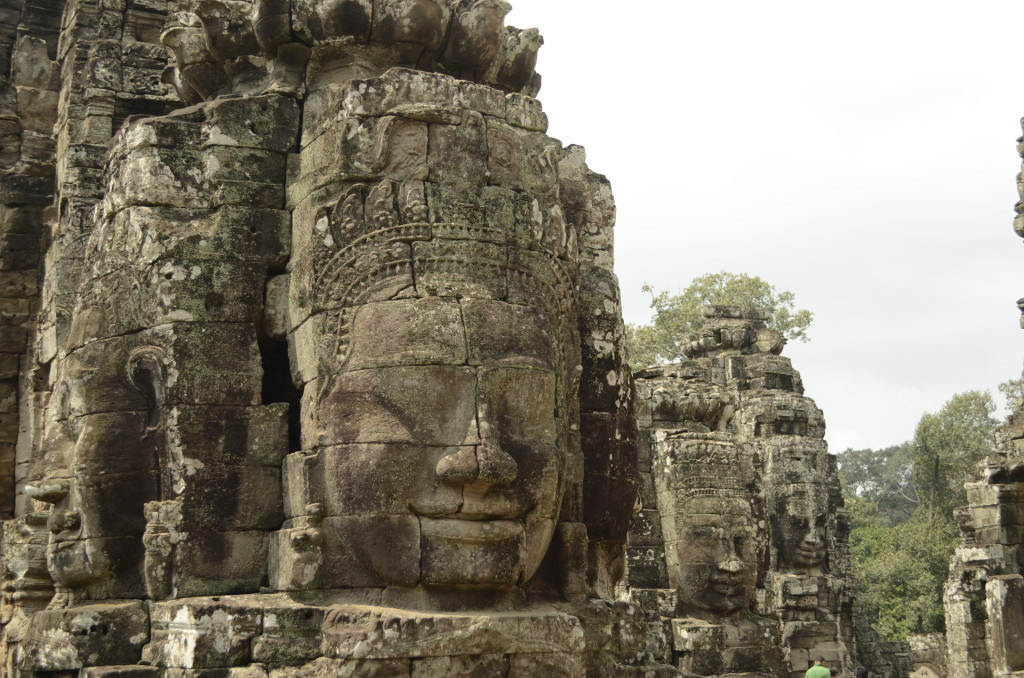 Bayon and other temples in Angkor Thom that were getting restored and were magnificent.

Ta Prohm was the temple where the movie Tomb Raider was shot.
Don’t remember?
The one with Angelina Jolie as Lara Croft.
Now it rings a bell, eh?
Incidentally, Ta Prohm Temple conservation and restoration is being undertaken by India – ASI (Archaelogical Survey of India). 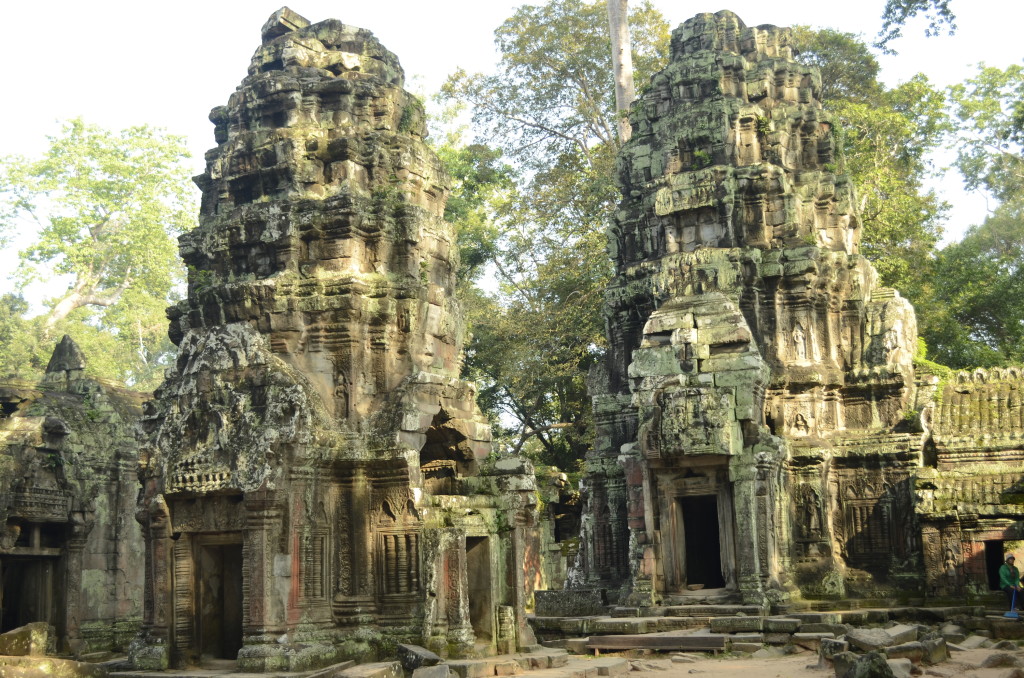 Frankly, after these I just lost track of the temples we saw sort of a Temple Run happened (running away that is:)). We focused more on the “spirited” (and less on spiritual) activities in the evenings at the Pub street and the night market. The foot massage on the street was just amazing. It had free Wi-Fi, in fact everywhere there was free Wi-Fi.

Next morning, with a heavy hangover we somehow managed to go to Angkor Wat early in the morning to catch the temple against the sunrise. It was one of the most beautiful sunrises I have ever seen.

More temples and a boat ride in Tonie Sap lake (that was more like an ocean) to see the floating village, and our trip was almost over. We had our final lunch at the FCC here (with amazing fish amok again) and we were ready to leave for Vietnam (our next leg of the journey). 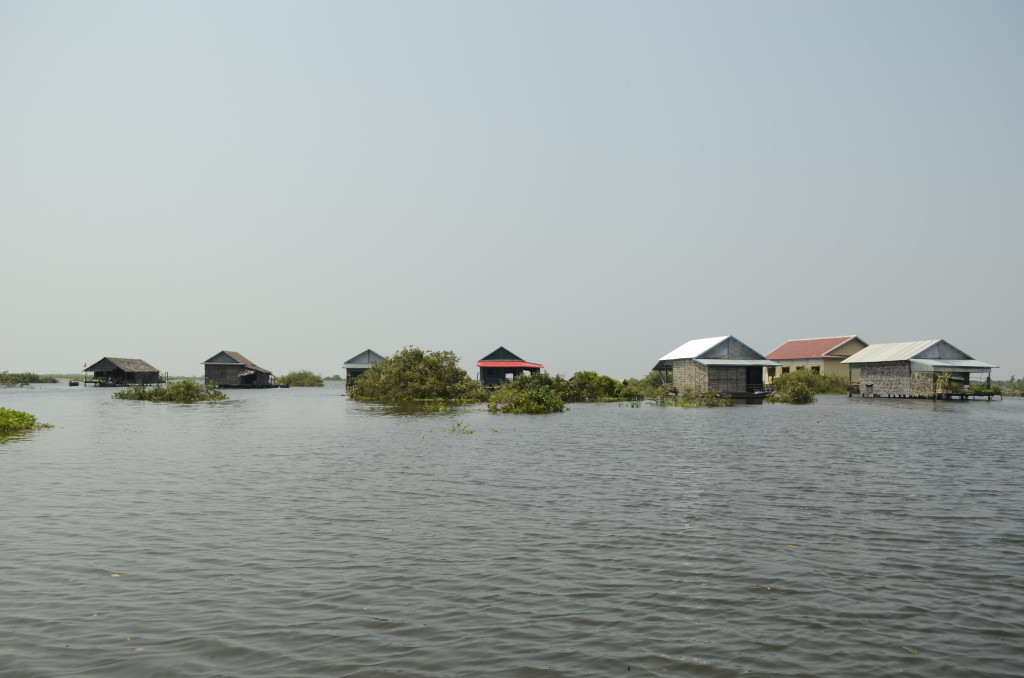 As we rode in the Tuk Tuk towards the airport, I couldn’t help but think about how the India Culture (incl. Hinduism) had spread into the Far East followed by Buddhism, from India. There had to be strong trade and cultural links between India and Khmer. How Cambodia (Khmer) was once a prosperous nation and is now trying to break the shackles to emerge again. With the people we met and saw – hardworking and honest, I think they will get there soon.