We reached Ephesus, after an early morning flight from Kayseri (Cappadocia) to Istanbul to Adnan Menderes Airport (Ephesus). After delays, we managed to reach at around 11 am. We were warmly welcomed by our guide, Inaan and straight away driven to the House of Virgin Mary.
The House of the Virgin Mary is a Christian  and Muslim  shrine  located on Mt. Koressos  in the vicinity of Ephesus (7 km from Selçuk).
It is believed by many Christians and Muslims that Mary, the mother of Jesus, was taken to this stone house by Saint John and lived there until her Assumption into Heaven according to many Catholics, or the Dormition according to the Orthodox. Now this was a surprise as we didn’t know about this at all. The entire complex was a serene place. We offered our prayers and according to the custom, tied a knot (using a paper) so that our prayers would be heard (Incidentally, similar concept is in many cultures incl. in Rajasthan, India). The complex was also a source of hot spring water or holy water, which we took. 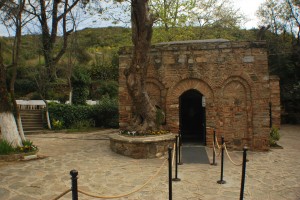 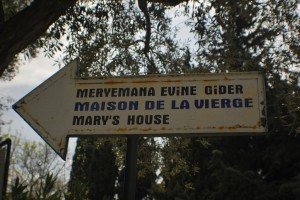 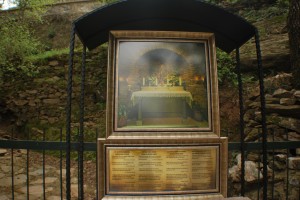 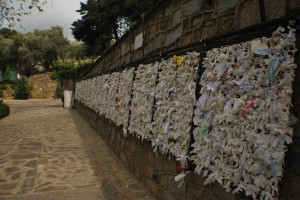 We had lunch at a carpet store ( a co-operative), where we were shown the art of carpet making and how silk is weaved out of silk worms. Amazing !! We somehow avoided the aggresive sales pitch and went on our way to the historic city of Ephesus.

Ephesus (Turkish Efes) was an ancient Greek city on the west coast of Asia Minor, near present-day Selçuk, Izmir Province, Turkey. It was one of the twelve cities of the Ionian League during the Classical Greek era. In the Roman period, it was for many years the second largest city of the Roman Empire; ranking behind Rome. Ephesus had a population of more than 250,000 in the 1st century BC, which also made it the second largest city in the world. 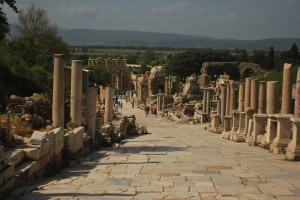 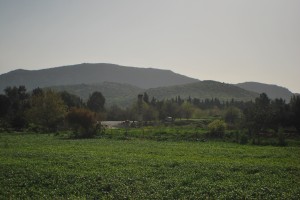 The city was famed for the Temple of Artemis (completed around 550 BC), one of the Seven Wonders of the Ancient World. The temple was destroyed in 401 CE by a mob led by St. John Chrysostom.  All that is left is a pillar (a real disappointment from what we had expected). Emperor Constantine I rebuilt much of the city and erected new public baths. The town was again partially destroyed by an earthquake in 614. The city’s importance as a commercial center declined as the harbor was slowly silted up by the Cayster River (Küçük Menderes). 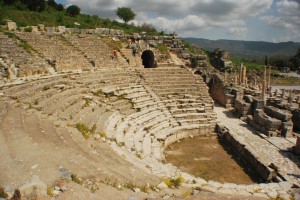 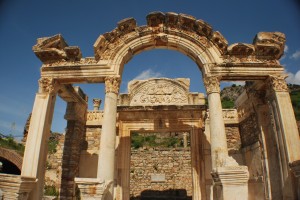 Main attractions of Ephesus are the Theater, Temple of Hadrian, Library of Celsus, The Odeon (a small roofed theater),  Temple of Domitian, Fountain of Pollio and Basilica of St. John (built by Emperor Justinian). 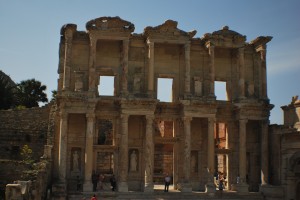 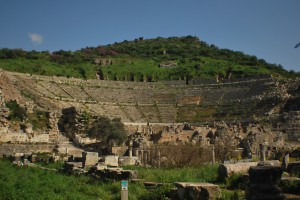 There was a beautiful statue of Nike – Greek goddess of victory. We also came across an interesting stone on the street, which gave direction to the brothel. A foot was engraved on the stone, highlighting that the minors (and therefore with smaller feet) will not be allowed in the brothel. 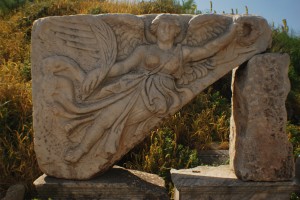 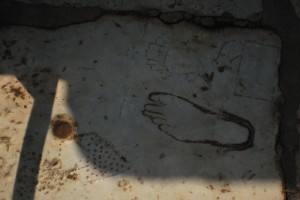 Ephesus was one of the seven churches of Asia that are cited in the Book of Revelation.The Gospel of John may have been written here. It is also the site of a large gladiators’ graveyard.

This must be one of the best preserved Roman ruins in the world incl. the ones in Italy.

We stayed the night at Hotel Kismet, which was a very beautiful hotel, with our room overlooking the Aegean Sea and the port. The hotel has been frequented by many famous celebrities like Queen Elizabeth, Queen of Netherlands, President  Johnson, many members of the Ottoman Imperial Family, Joan Baez, President Carter and so on. 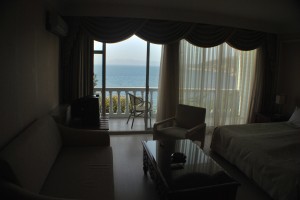 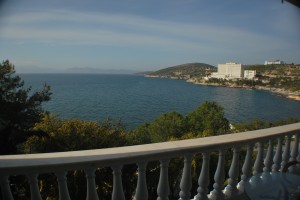 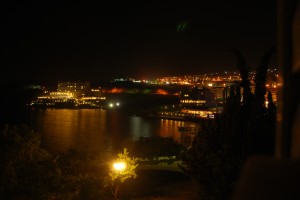 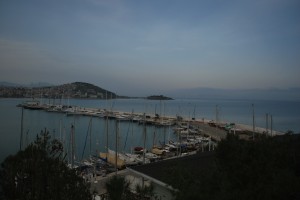 We had dinner overlooking the sea and slept early in anticipation of the drive to Pamukkale the next day.

We started early at around 8 am. The drive from Ephesus to Pamukkale would be around three and a half hours. On the way we stopped at Aphrodisias.

Aphrodisias (named after Aphrodite – Greek Goddess of Love) was a small city in Caria, on the southwest coast of Asia Minor.  The city was built near a marble quarry that was extensively exploited in the Hellenistic and Roman periods, and sculpture in marble from Aphrodisias became famous in the Roman world. The city was famous for building sarcophagus. 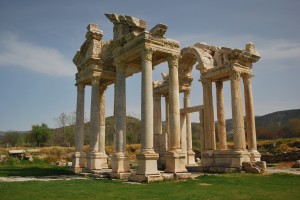 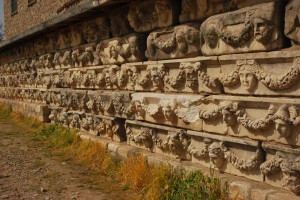 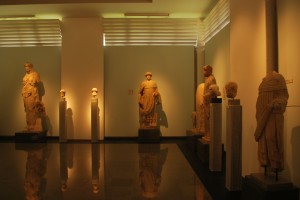 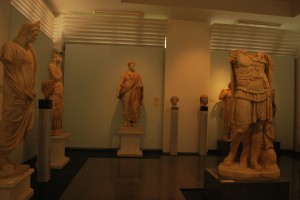 After quickly looking around, we stopped for lunch and then headed towards Hierapolis which is adjacent to Pamukkale.

Hierapolis was the ancient Greek city on top of hot springs.  The hot springs there have been used as a spa since the 2nd century BC, and people came to soothe their ailments, with many of them retiring or dying here. The great baths were constructed with huge stone blocks without the use of cement, and consisted of various closed or open sections linked together. There are deep niches in the inner section of the bath, library, gymnasium and other closed or open locations.  The complex housed a hospital and a majestic theater. 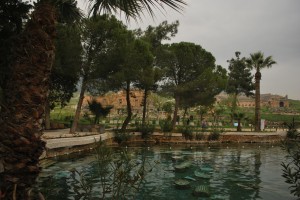 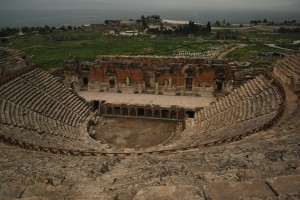 Adjacent to Hierapolis is Pamukkale, meaning “cotton castle” in Turkish. Pamukkale was formed when warm mineral water cascaded over the cliff edge, cooling and depositing its calcium.  In the present form, its a beautiful sight of gleaming white  calcium formations (travertine pools) and terraces of carbonate minerals left by the flowing water. Picturesque !! 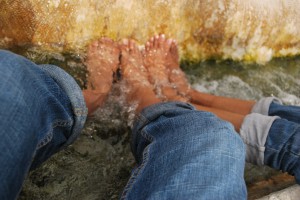 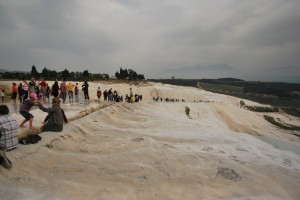 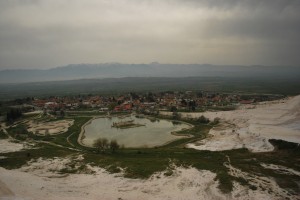 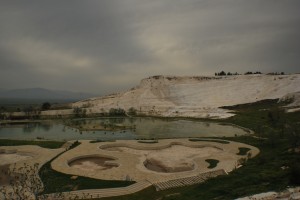 It was a pleasure, walking on the travertines and warm spring water. After much reluctance, we headed towards the waiting car to be driven to the Denizli airport for our flight back to Istanbul.

After Cappadocia’s welcoming nature, these two days were a bit let down as we were a bit pushed to see what we didn’t want to (like the pottery co-op, and further attempt coaxing us to buy) and were asked for tips, which shouldn’t have been as it is voluntary.