Oh well!! This is not a movie…but after what happened in those two days of trekking…it could well be.

(Magnificent) Seven is the number of people from office (incl. me) who went  for the Kumara Parvatha trek after a great initial response.  That would be Sachin, Prema, Ravi, Drupad, Chetan, Akshay and me. 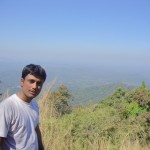 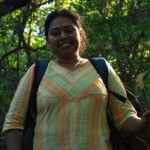 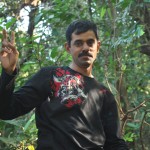 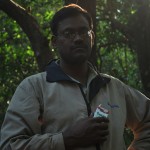 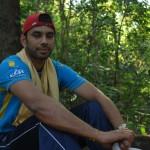 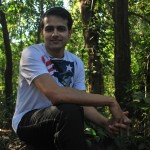 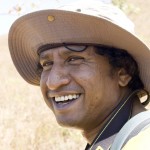 Kumara Parvatha is a mountain located in Subramanya (village) of Sullia taluka, Karnataka.  The peak is at a height of about 1712m, and is about 13 km from the Kukke Subramanya Temple , which is a prominent pilgrimage location in South India. Here, Lord Subrahmanya is worshipped as the lord of all serpents. The temple is located at the town Kukke-Subramanya, 230 km from Bangalore on the route to Mangalore. 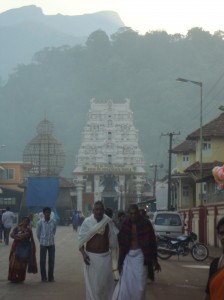 After 2 weeks of meticulous planning, finally on 5th Feb, the seven of us set off for the Kumara Parvatha trek in the “Tempo Traveler”, which we had hired.  Before setting off from bangalore, however, we did an inventory check of sleeping bags, tents, food items, water, medicine kit, torches, walkie talkie, my new GPS device etc. etc. (Special thanks to our equipment supplier/consultant – Vikram Raghavachari)

After, an uneventful journey and loads of Kannada songs, we reached the town in the wee hours of the morning. It was misty and cold.  We quickly booked us a couple of rooms in the local “Ashram” to freshen up. After breakfast (Neo Mysore cafe) and another inventory check wherein I ensured offloading of some excess weight particularly some dozens and dozens of bananas. Apparently the monkeys in group had clearly “over shopped”. 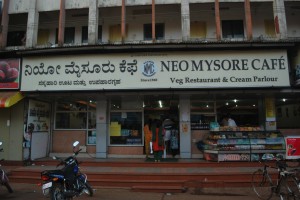 We entered the forest around 8 am, delayed by an hour as per our plans.  It was a nice steep walk in the forest shade.   We took it very easy and stopped wherever we could for rest and take photos.  It was a nice walk and as I walked I got to know the guys better. Akshay, the main organizer of the trek was a passionate photographer, which explained his tripod I was carrying. Chetan, one of the fittest of the group, was a fabulous cricketer and was looking forward to the up and coming season to make it to the big league. Drupad lived very very far away. So did Prema, the only girl in the group, who I thought was the weak link in the group, till I was proven wrong at the end of the trek. Ravi had a point to prove to his son and more to himself as well that he could do this trek. Sachin the creative designer, was an athlete and a NCC cadet in his early days. This was the first ever trekking experience for all  (except for me). The way everyone was upbeat, it looked promising. 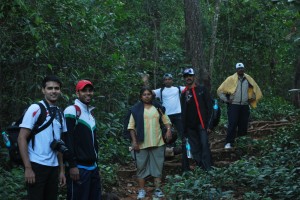 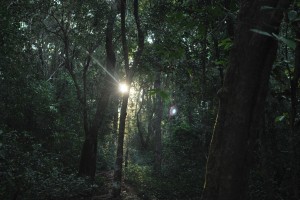 Did I speak/write too soon? Some 3 km into the trek, the tiredness set in.  We divided ourselves into two sub groups, tho’ not much apart and communicated through the walkie talkie (and how useful it was). I was monitoring the distance and the height we were covering through my new Keymaze 500. As we approached our first destination, Bhattara Mane (House of Bhat family), which is 5 km from the starting point, fatigue and cramps set in to some of the trekkers. We started redistributing luggage and started walking with sticks, which helped.
Now Bhattara Mane is run by Narayana Bhat and family. This is the stopover point for the trek and is also used for the night stay usually during the return journey as the trek can not be completed in a single day due to its toughness and distance. The Bhatt family provide trekkers with night shelter, water and plain vegetarian meal on request at a nominal price. Trekkers need to use their own sleeping bags though. PH No:+91-9448647947 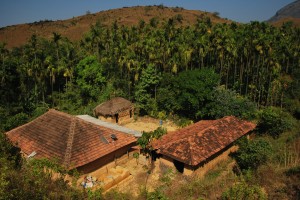 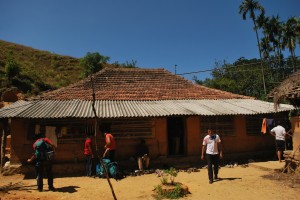 We finally reached the place and immediately, attacked the food, which was simple rice, sambar, pickle and buttermilk. But it was the most delicious meal I have ever had. After a one hour stopover, which included sleeping, stretching, massaging and muscle relaxant sprays, we took off. However, Drupad opted to stay back, and we offloaded some more weight with him. It was a hot afternoon and suddenly we realized there was no forest cover anymore. We were walking in the hot sun from mountain to mountain in sail trails. After a point we again were separated into two groups. 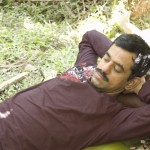 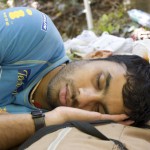 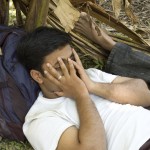 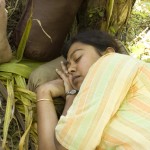 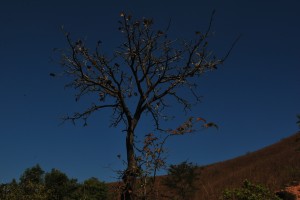 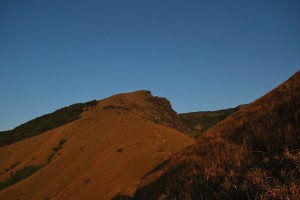 Around 4:30 pm we reached Mantapa, our next destination. Now this is a camping site with close proximity to the stream.

However, we trudged along in the hope of catching the sunset at the peak. By this time most of the fellow trekkers were exhausted, but we pushed. An hour later the peak was nowhere close. As other trekkers (many young RSS recruits) passed by, we came to know the peak is more than 2 hours away., with the nearest camping site an hour away. We panicked and started looking for a flat patch of land, otherwise we would’ve had to go back to the Mantapa. We were lucky and we found the patch which was between two mountains and this was just before the sunset. 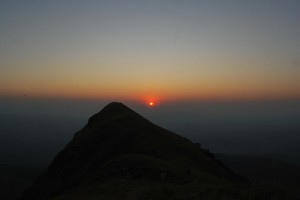 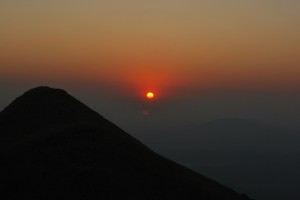 For the next 45 min we tried pitching the two tents, one of which was faulty. It was now night and the temperature had dropped. And we realized that it was very very windy esp. since we were right between two mountains. We quickly had dinner – puliogare, biscuits, bananas (whatever was not crushed) and more. And took to our respective tents. Sachin and I took the faulty tent and the rest took the other one. 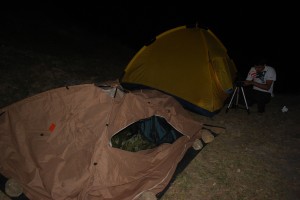 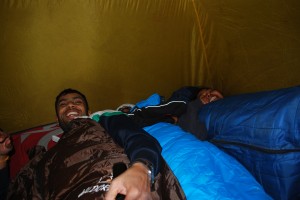 The wind speed increased as the night went by. After sometime, our tent was in a wreck, we could feel the roof. The other tent was in a worse state. Finally, the sun rose and morning welcomed us. But the wind speed didn’t slow down at all.  Finally, we decided to move on, barely ignoring the wind. At this point Ravi and Sachin decided to go back and the four of us went towards the peak.
We walked briskly across the many peaks and green mountain tops till we entered a forest, which had a stream. Now this was supposed to be the camping site before the peak as we saw many trekkers cooking, packing up, extinguishing fire and so on. We walked along till we reached a very steep incline. As we climbed that very carefully, and some 100 mts away we were on the peak. We had climbed a height of around 700 m and walked around 3 km today. The landscape from the top was breathtaking. We spent almost an hour on the top, had breakfast and clicked away as many photos as we could. 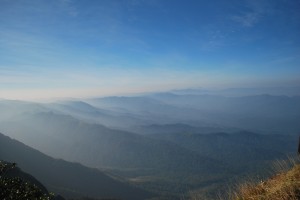 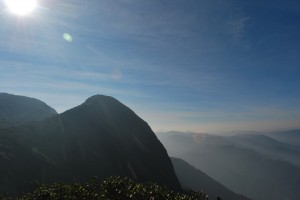 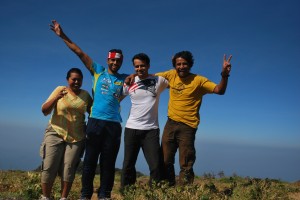 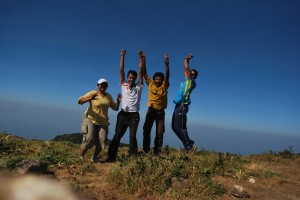 Eventually we started the descent and it was difficult on the knees. In one and a half hours we reached our camping site and picked up a packed tent which we had left behind. In the course we established contact with the other group through walkie talkie andasked them to keep lunch for us at Bhat’s and to proceed to Subramanya.
Now all this while, Prema had been stoically walking without many breaks. This was awesome. We walked past mantapa and into the open hot sunny sky. After couple of hours we reached Bhat’s place, had lunch and after a bit of rest we set off again. It was 3:15 pm when we set off, we needed to walk fast to reach Subramanya before dark. However, the pace slowed down with the descent and fatigue due to hours of walking since morning. And as we entered the last leg of the trek i.e. deep inside the forest the light began to fade and quickly it became dark. The torches were out and we began prodding each other to quicken pace.  The pace quickened further when heard something move in the bushes. Finally, around 6:30 pm we exited the forest.

We joined Ravi, Drupad and Sachin at the lodge and after dinner set off for Bangalore.
I have been trekking for quite some years now and I’d say this was one of the tougher treks I have been into. Kudos to my fellow trekkers for making it.
Look forward to the next one. Till then… cheers… 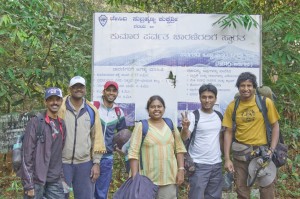 Hampi : The empire strikes back