Many folks asked me what I did in the beautiful island of Santorini (also known as Thira), where I had gone with PB in August?

Frankly, I have no frikkin’ recollection except for eating, drinking, sleeping, reading, watching (sunsets) – in one word “chilling”.

And when I am trying to write this blog post, I am at a loss of words as how to translate the action (or the lack of it) and expand this “chilling” bit to 1000+ words.

So I will try to answer some easier questions starting with this one.

How does an active volcano look?

Beautiful, if it is Santorini. And because of its beauty it was renamed Kalliste (the fairest one) as civilizations started re-inhabiting the island in the 13th century BC starting with the Phoenicians fearless of the active volcano, which destroyed the Minoan civilization and broke up the single island around 3600 years ago (also called as the Thera Eruption – the source of the legend of Atlantis).

Santorini is an island located in the southern Aegean Sea, about 200 km southeast from Greece’s mainland. It is the largest island of a small, circular archipelago, which bears the same name. It is remnant of a volcanic caldera with a huge central, rectangular lagoon with the deepest of blue waters, sometimes as deep as 300 m straight down at some points near the shore without any gradual sloping. 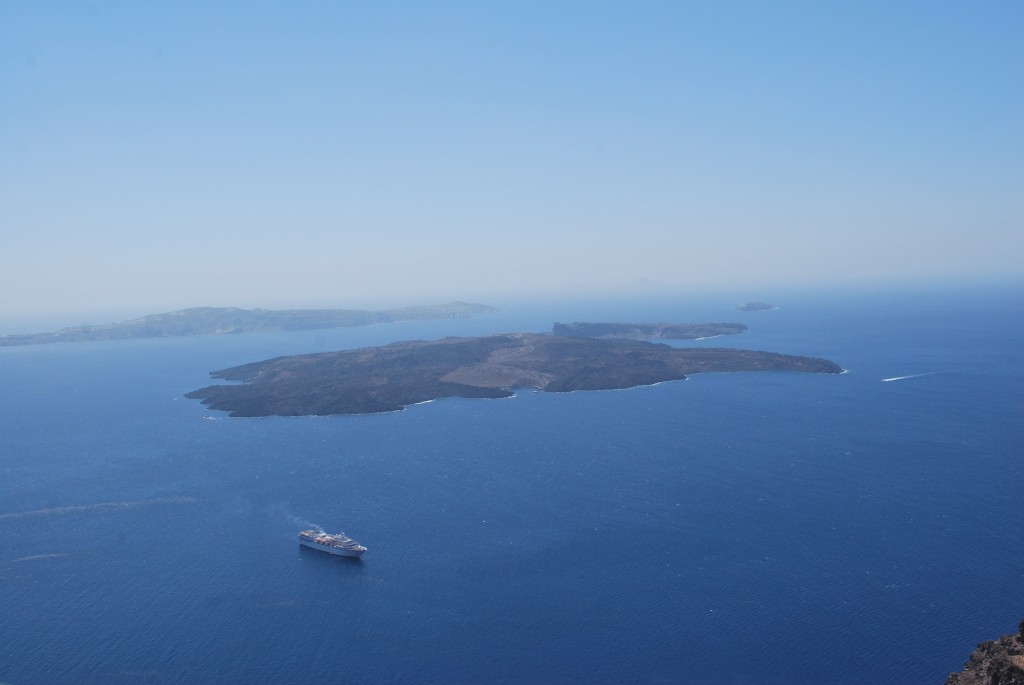 From Mykonos, it took us around three hours to reach Fira (capital of Santorini) and we were immediately driven to the southern most corner of the Island known at Oia (pronounced as E-ya). The bellboy received us and took our luggage up and down in the flight of steps as we walked for 10 minutes to reach the picturesque Esperas Traditional Houses.

Phew!! that was some heavy lifting!! Just watching that made me tired. I took a silent vow to desist from such activities during my stay here. 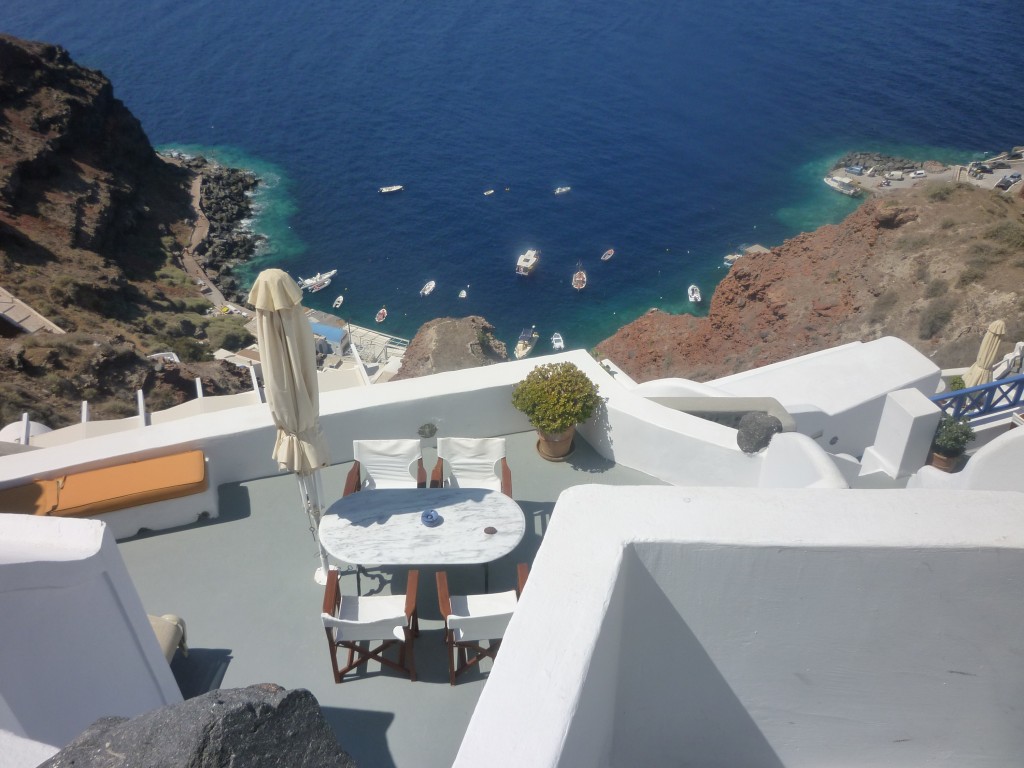 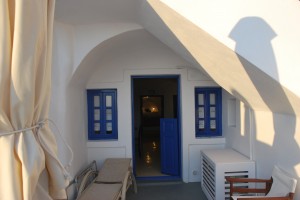 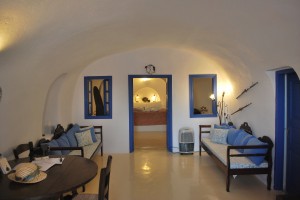 Esperas was again at multiple levels.  We had planned to stay here for four days. The apartment was extremely pretty with two rooms and a small functional kitchen with an extended balcony, decked with comfortable beach chairs, overlooking the caldera and the Aegean Sea. This was to become the permanent spot in the days to come accompanied with the customary white wine while watching the beautiful sunset disappearing into the blue oblivion of the sea.

We had reached late in the evening and after settling in decided to walk towards the Oia village at around 10 p.m. for some sustenance. Now my idea of a village is that of a sleepy one where everybody sleeps at 6 p.m. So with some (rather lots of) hesitation we made our way to the village hoping that the restaurants would be still open to soothe our hunger pangs. In less than five minutes we reached the “village”. The place was bustling with activity, with crowded restaurants and souvenir shops. We came to know that the place was open till late (as late as 1 p.m.). 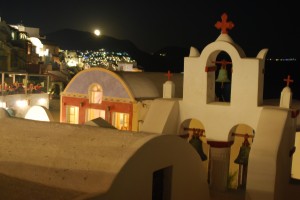 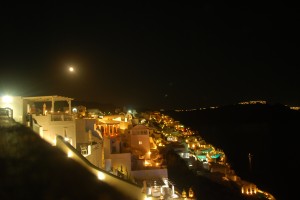 Santorini is not the “partying” types Mykonos is, if you know what I mean. Instead, the place is known more for its typical slow-moving-take-it-easy kind of pace Greece and particularly the Cyclades is famous for.

There is a saying here – when in Santorini do as the Greeks do.

Just chill!! Take it easy and do not worry about the time. (I took the cue and stopped wearing my watch for the rest of our stay. Really did!)

It was just perfect for us after the hustle and bustle of the big cities we came from. Our stay in the island was characterized by just that – doing nothing!!

PB, obviously shopped her heart and wallet out in Oia.

‘How can one not shop in a beautiful place such as this?’ She reasoned.

‘But that goes for everyplace isn’t it? Shopping, that is.’ I said silently, completely aware of the consequence had I said it aloud.

But Oia is a charming place. Blue domed houses and churches painted white against the unbelievably blue waters of the lagoon – completely enchanting. The architecture is unique to the Cyclades. The houses have been delved into the porous volcanic rock and all the edges of the walls have been rounded. This is something to do with preventing the erosion from the prevailing sea breeze. 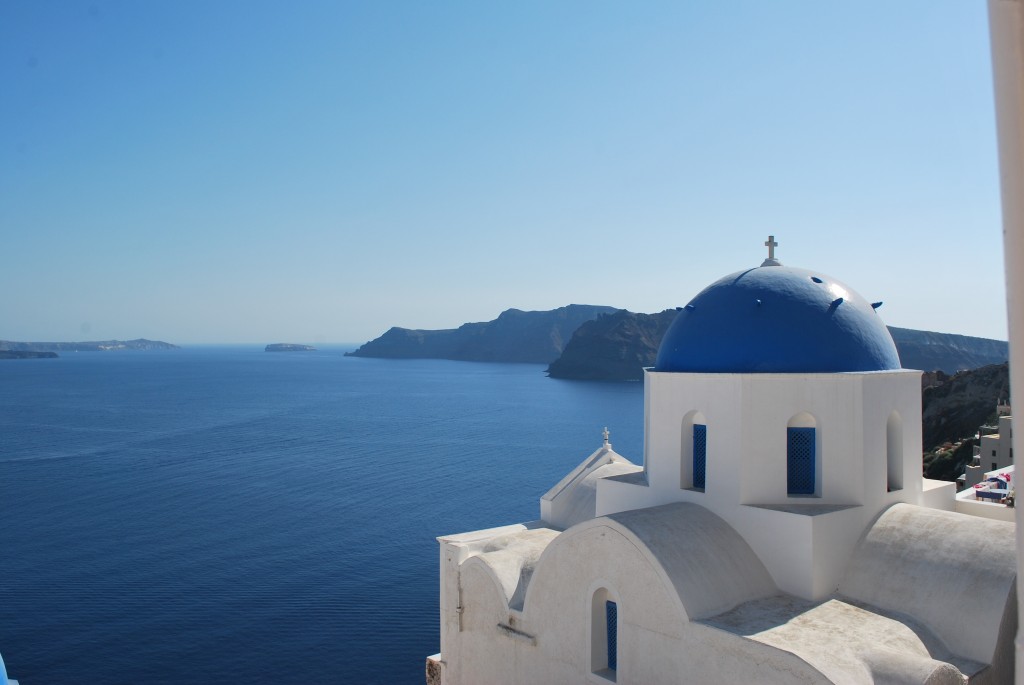 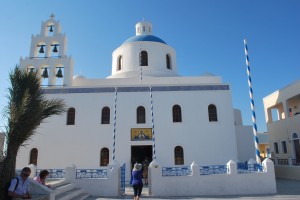 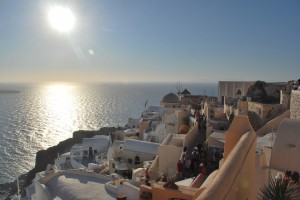 Our first day was spent entirely at the hotel pool reading and swimming done many times over accompanied by the delicious cocktails and fresh juice. Oia village provided us the timely nourishment as we discovered many great places to eat.

There are plenty of options for great Greek food (including the fresh seafood) with great ocean views – Red Bicycle, Papagalos to name a few. However, our favourite was Skala, which had an amazing view of the ocean and equally amazing food. Melanois bakery was another top pick, where we actually “dined” one night just on the desserts – ice creams, soufflés and other goodies.

I subconsciously kept a count of the calorie intake and the number of of miles I would’ve to run to burn those calories. However, I dismissed that thought as I took another helping of the rich gooey chocolate sundae.

How can I think of “exercise” in place like this?

The second day we set out sailing. We had booked a yacht, which took us out into the deep blue lagoon as we explored the caldera. The volcanic activity has left its mark on Santorini’s beaches as well and is characterized by the colour of the volcanic deposits in the sand. 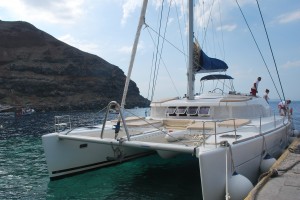 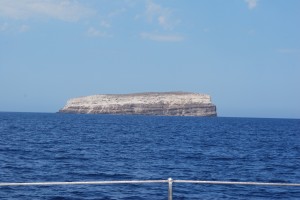 From the yacht we explored the red beach, which earned its name from the red volcanic sand. We swam in the hot (actually warm) springs near the caldera, at Palia Kameni (old burnt). It is a muddy looking bay as the water contains sulphur, supposedly good for the skin. We scuba dived almost kissing the multi-coloured fishes in the sea. Finally, we anchored near the white beach as we had barbecued lunch with plenty of white wine.  As the captain steered the yacht across the ocean, one could feel the gentle cool sea breeze ruffling one’s hair. I felt it too (or was it too much wine?).

Anyways, it was a great sailing experience, which cannot be put into words. We reached our hotel and a couple of hours later watched the stunning sunset from the balcony at 8 p.m.. 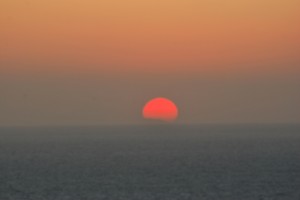 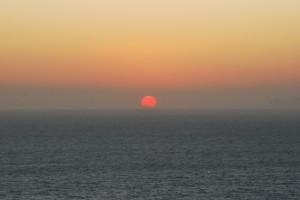 Each “act” of the sunset as we notcied over many evenings, was accompanied by clapping and cheering from the tourists perched at various strategic locations, wherever they could, to catch a glimpse of the great ball of fire changing its colour in the amazingly blue and red skyline, unhurriedly slipping beyond the horizon. 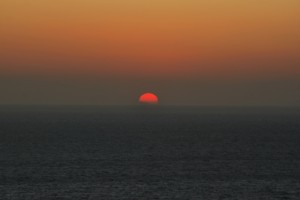 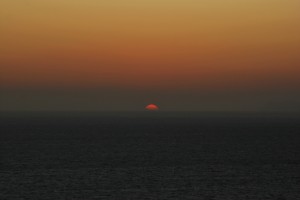 Every evening complete with the awesome Santorini white wine. 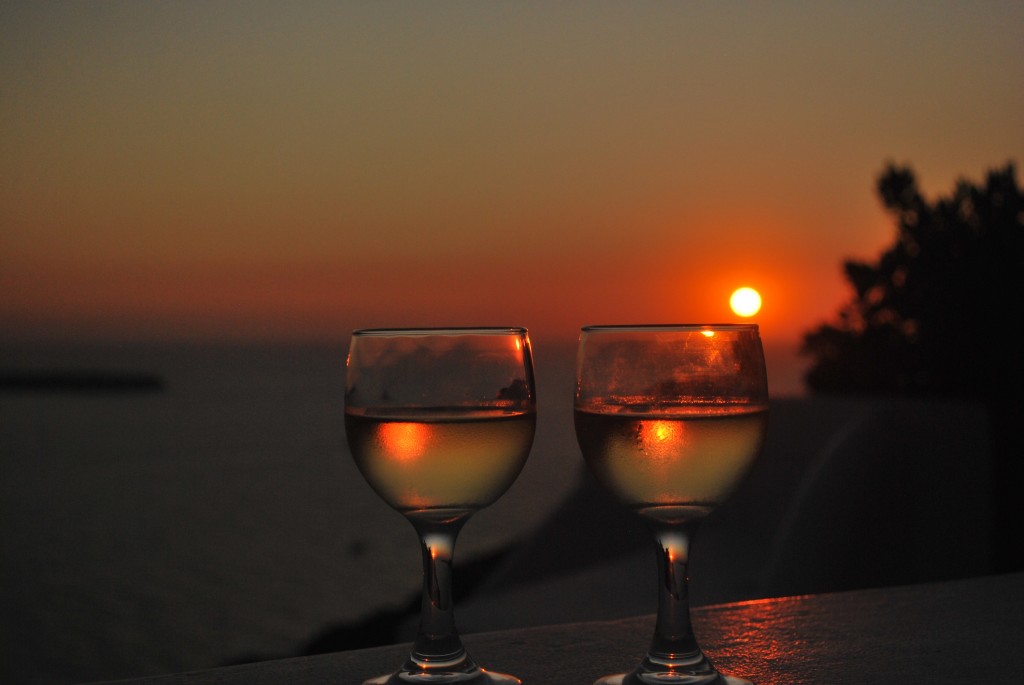 I have no recollection of what we did on the third day except that we chilled around the pool, I finished reading my book (I was carrying four of them…what was I thinking?), slept, watched a movie on the DVD player, went to the Oia village for the usual nourishment and watched the evening beautiful sunset.

On the fourth day we decided to really do something.Finally !!
So we set out towards Fira (capital of Santorini) just after breakfast. We availed of the convenient bus service but got down earlier at Imerovigli. The place has an amazing view of the caldera and is characterized with many pretty Churches all built in the typical Cycladic architectural style. After an appetizing walk through the beautiful streets lined with quaintly pretty houses we took the bus to Fira, which was just 2 km away. 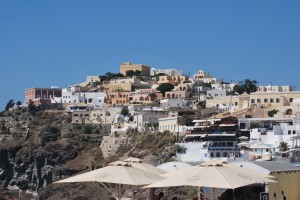 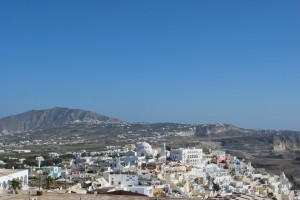 The sun was beating down hard. We took refuge in a Greek restaurant overlooking the scenic blue lagoon. The usual fish, white wine and some salads completed the awesome (burp!!) meal.

It was afternoon and the sun was still at its zenith. We again took refuge in the air-conditioned Archaeological Museum. And glad we did. Not because it was really pleasant inside, but the museum had some amazingly rare artifacts and some very useful information about the history and geography of the Cyclades and Santorini in particular. This information was something we had ignored while focussing on “chilling” away at the island. The museum is a must do.

We walked around Fira for quite a while in the market, souvenir hunting, visiting quaint churches and taking pictures. Being the capital of Santorini it is crowded and commercialized. The hustle and bustle of a large town was evident with the number of tourists we noticed roaming around the pretty by-lanes and visiting cute shops. 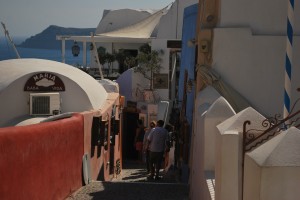 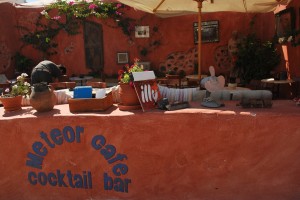 We longed to get back to the quieter Oia (though Oia village is hardly that) as we took the bus back. We flew back the next morning.

To practice the art of chilling, we had decided to take it easy at Santorini and not do everything that is written in tourist guides and books. However, there are activities one should do such as going up the caldera on a mule, visiting the beaches (thought beaches back home were better), visiting a winery (regret not doing this).

–     Don’t…expect to party, it is not a party island like Mykonos is.

–     Don’t…book a tour, explore the island yourself. It is not a big place. Take a bus or rent out a car. Also go beyond just Oia and Fira, as there is lot to explore.

–     Don’t…spend too much on a meal with a view. Sometimes the food in the inner lanes is inexpensive and more importantly better.

–     Don’t…expect things to go as planned….expect Chaos and revel in it.

Santorini is a place to relax and chill. Just take your bottle of white wine and watch the beautiful sunsets.

The party never ends: Trip to Mykonos in the Cyclades, Greece