The party never ends: Trip to Mykonos in the Cyclades, Greece

‘Open your mind’ he said. I looked from a distance through my camera at the man with a clean shaven head like that of a monk. I noticed the serenity and calm reflecting from his handsome face. He had the mike in his hand and was imparting this philosophical knowledge to the large group of young people gathered around.  I focussed my telephoto lens to have a closer look at him, to discover that he was actually not wearing anything!!!
Was he one of those who had denunciated the world and shed all the worldly material belongings and pleasures, along with his clothes? I wondered.
I focussed the lens further and was relieved to see that he was not completely “clothless”.
There was some semblance of what looked like a elephant trunk made of cloth or leather, covering his bare essential.

He brought the mike closer to his face and completed the sentence, ‘open your mind, open your _____.’ (The last word is heavily censored.)

With that the crowd erupted shouting and cheering.
The music (latest trance/techno) resumed with the highest decibel levels possible.
The dancing was at its wildest as many standing on the tables gyrated with the beats.
More people had now gathered around this shack at this happening Paradise Beach to join the party.

He continued with the same fervour mixing music and imparting his “knowledge”.

The monk who transformed into a DJ !!!

Welcome to Mykonos!! The party island of the Cyclades!! 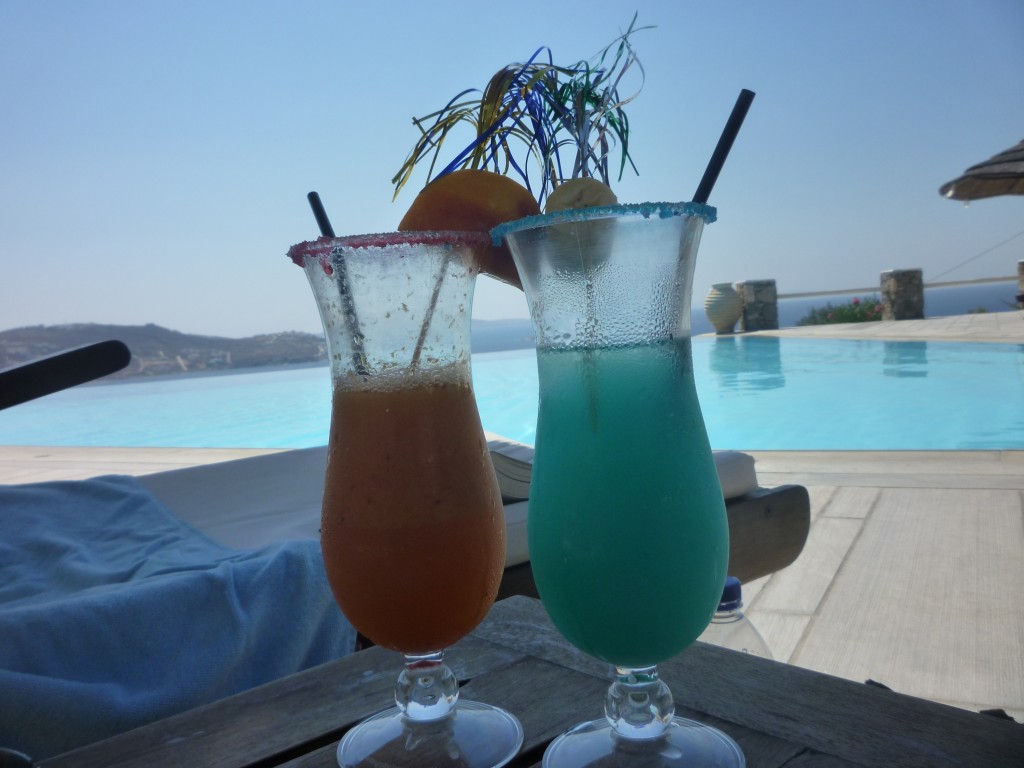 The Cyclades is a Greek island group in the Aegean Sea, south-east of the mainland of Greece. These islands are peaks of a submerged mountainous terrain with the exception of two volcanic islands, Milos and Santorini (Thera). There are about 220 islands in the Cyclades.

Due to paucity of time we decided to explore just two of them (Mykonos and Santorini) and maybe come back for 218 maybe sometime later. Yeah, right !!!!

It took us around four hours to reach Mykonos from Athens in a high speed boat after much confusion at the docks with regards to the tickets. 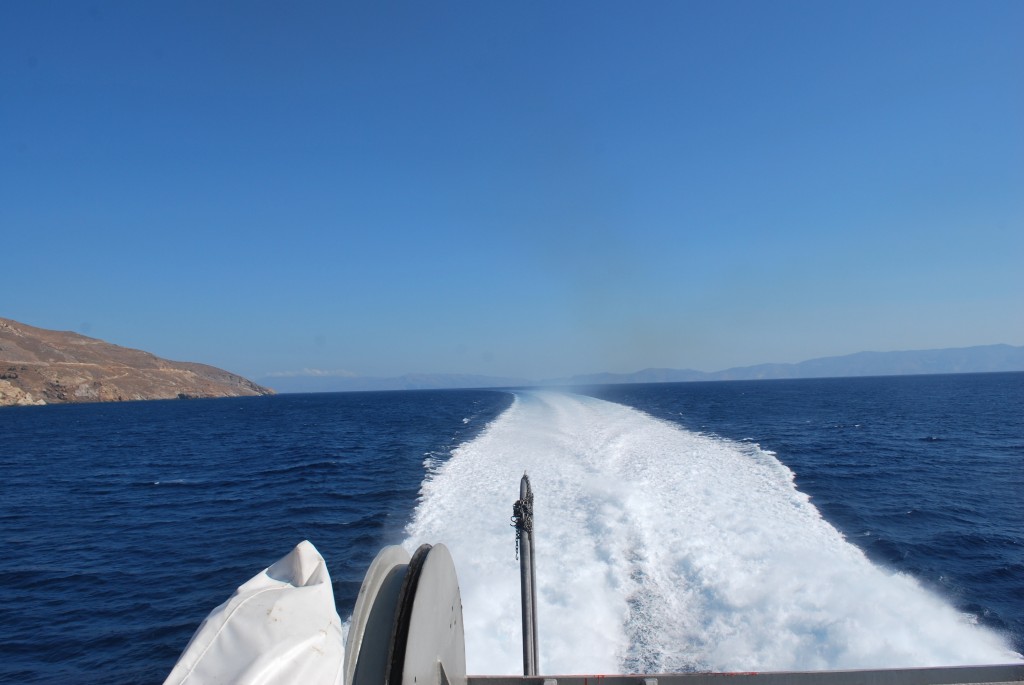 As the ship cruised away from Athens, the entire surrounding around us filled with an amazing hue of blue from the skies and the waters of Aegean Sea.  Along the way we passed through small beautiful islands with light coloured houses sparkling against the deep blue waters of the sea. I was astounded by the whiteness till we reached Mykonos.
This place was immaculately white, literally. The streets, houses, hotels were all whitewashed (every 3-4 months I was told) contrasting with the blue doors and widows matching with the colour of the sea.

Vencia, the cute boutique hotel, where we stayed, was at one of the highest points of the island and the view from there was breathtaking – like milky white land submerging into the deep blue sea.

The hotel staff was warm and polite, as all the other Greeks we had met. They informed us that the island spanned an area of just 86 sq. km and the population was around ten thousand or so with equal number or more of the tourist population pouring in by the day – many of them day trippers or with the big cruise ships anchored near the harbour. 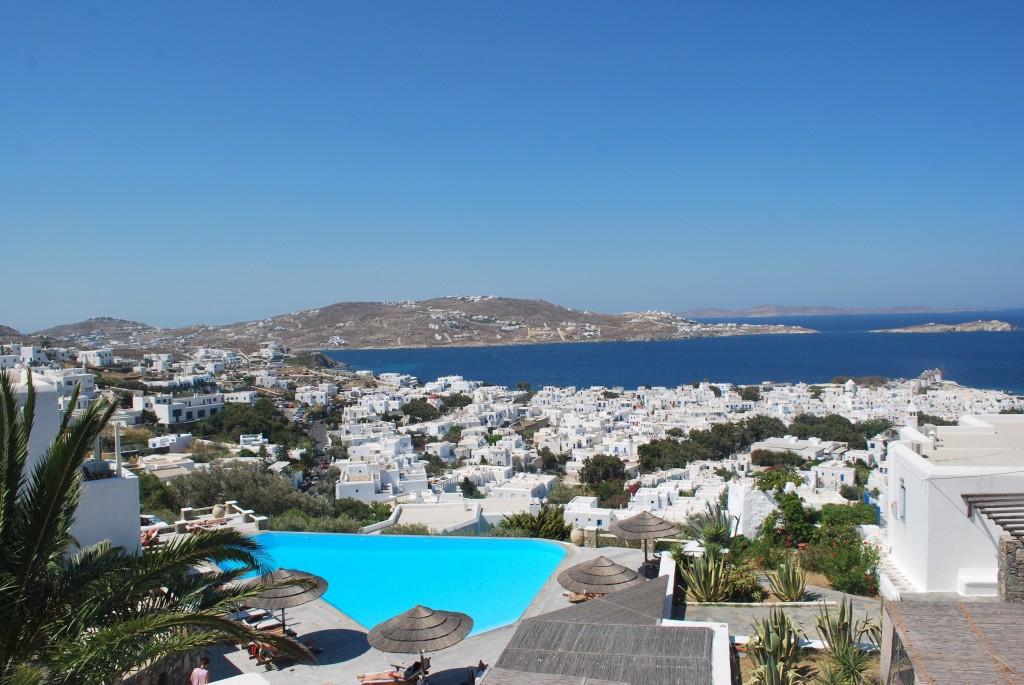 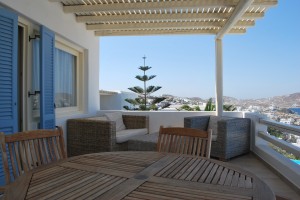 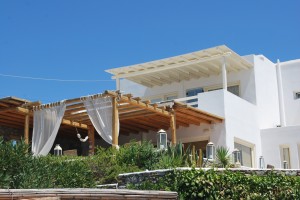 Mykonos town, which occupied the better part of the island is marked with confusing maze of beautiful lanes and by-lanes lined with quaint boutiques, art galleries, museums, tiny churches, souvenir shops and restaurants. It took us half an hour (what is usually a ten minute walk) across the town to reach the sea lined by the 16th century majestic windmills (Kato Myli).

Overlooking the windmills, at the southwest end of the harbour, is this Chlora neighbourhood called the Little Venice and is one of the most spectacular places on the island. 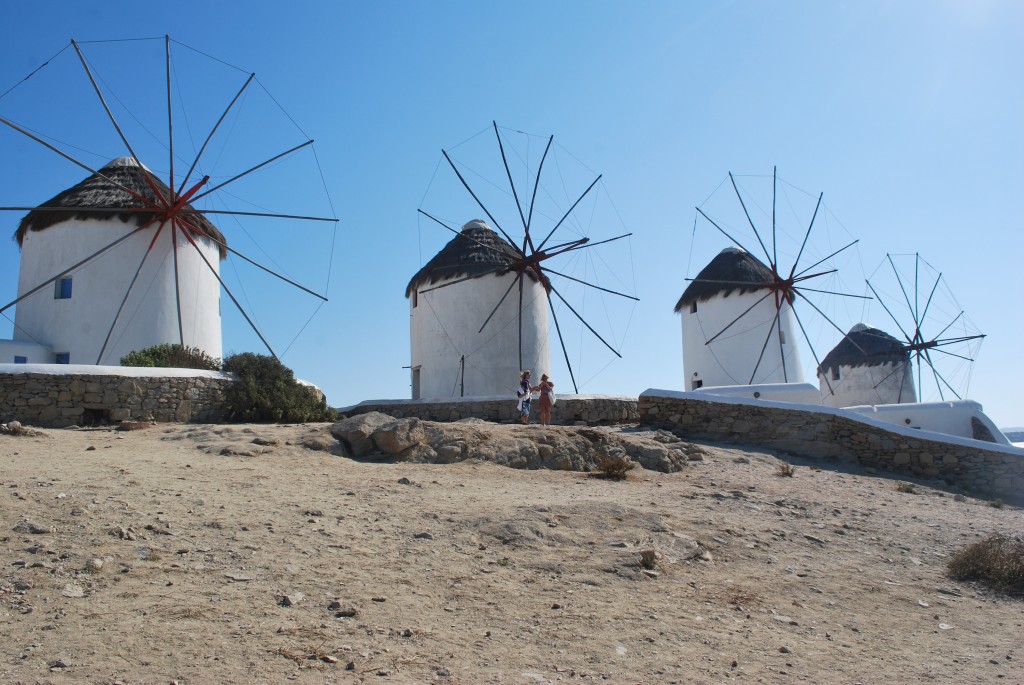 We walked, shopped and looked around in this beautiful town till we realized at around 8 p.m. it was evening as we saw the beautiful sun setting over the clear blue waters. I went berserk with my SLR, little did I know that this was just the beginning of many many beautiful sunsets in the Cyclades. 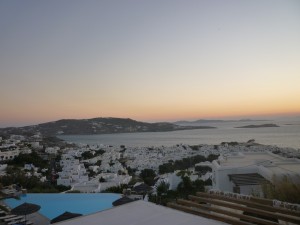 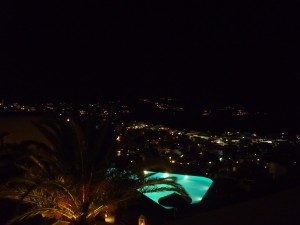 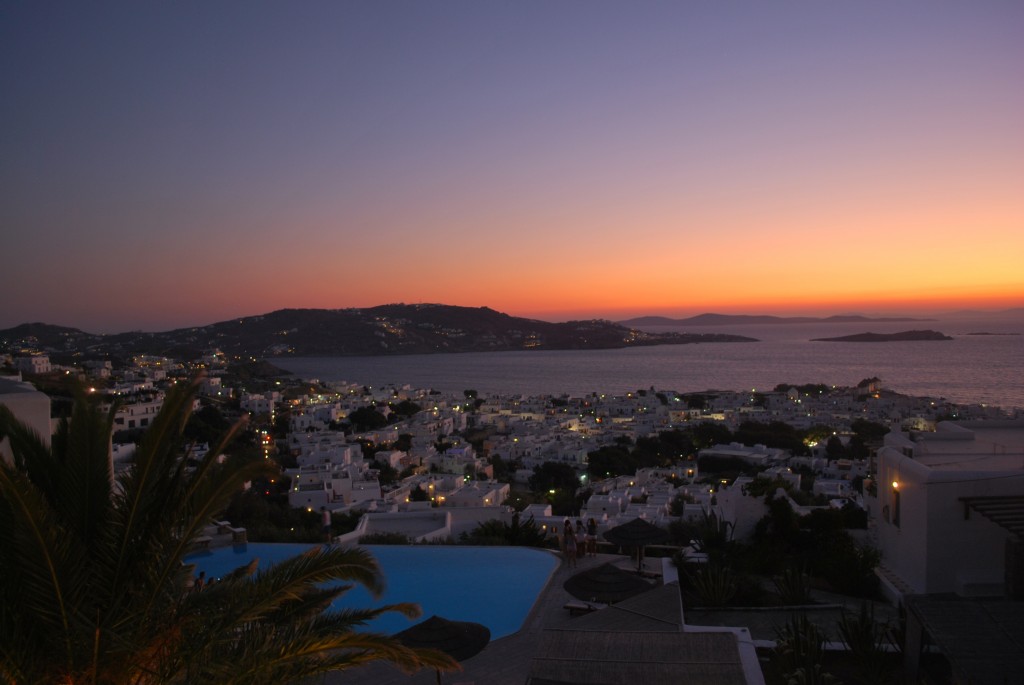 Mykonos in the night was busier than it was in the day. We had a late dinner at midnight. We were surprised to find that we were not the only ones. The streets, restaurants were bustling at that time of the night. The shops were open and were transacting brisk business. The island was more alive than ever as the bars, clubs were open and everyone especially the young were soaking in the revelries.

The first half of the next day was spent soaking in the sun next to the infinity pool at the hotel manned by the ever popular and no-nonsense bartender Dmitri, who mixed the most amazing cocktails. 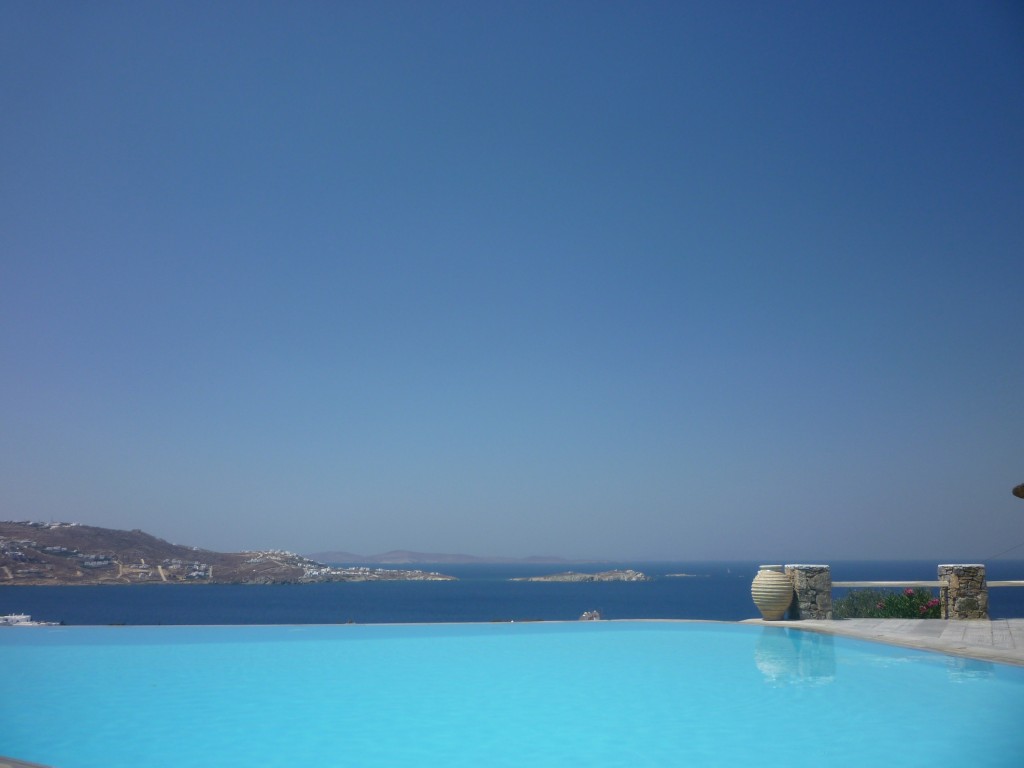 For food, restaurants such as Taverna Nikos (where we went twice), Phillippi, Paraportiani and many others dished out authentic Greek food. Cyclades is know for its fresh seafood and thats what we had throughout our stay. 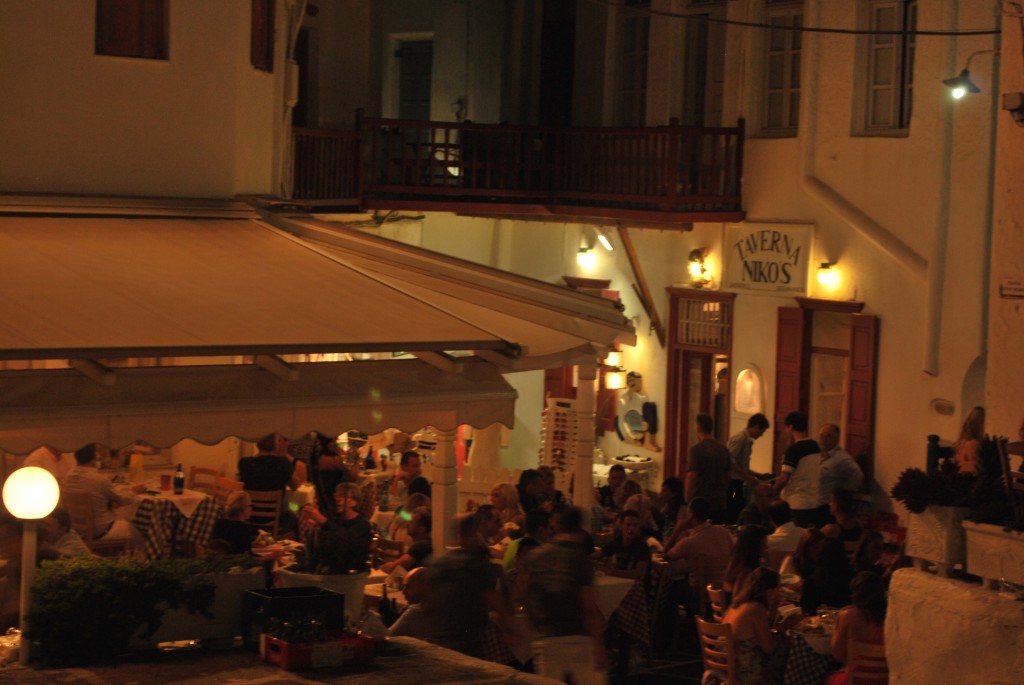 However, if you have come to Mykonos and not visited the beaches its such a shame. Paradise, Super Paradise, Elia, Agrari and Paraga are some of the popular ones. There are a variety of transport options to head towards these beaches. We took the easy one – the bus, which operates every half an hour or till the wee hours of the morning. It took us 20 min to reach Paradise beach, which was extremely crowded with almost every inch of the beach taken over by the sunbathers in their beach chairs. The beach was also extremely “happening” with the partygoers. “Party” is the buzz word in many of these beaches and are frequented by “naturists”, which is hardly an annoyance to the others, definitely not to some. 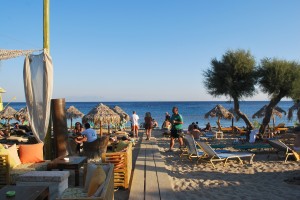 We headed back to the Mykonos town for a brief stopover for dinner and changing over as we headed back to the Paradise beach’s Cavo Paradiso club at 1 a.m. The place was not exactly crowded. Benny Benassi, a top DJ was supposed to perform. However, two hours later, as he arrived, we noticed that the crowd had filled up every inch of the dance floor and the club. The actual party started at 3 a.m. as he mixed his top mixers (?) synchronizing with the psychedelic lights in the club. 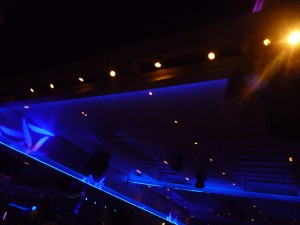 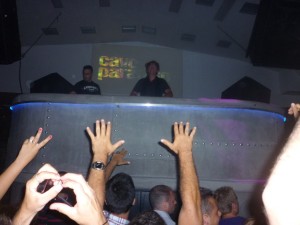 I set the dance floor on fire (PB’s version is a bit different here). My awesome dance steps generated a lot of glares and stares (in a good way), mainly from the “unfairer sex” (now this is the PB’s version I don’t subscribe to). Anyways, it was not completely untrue as well, as I withdrew from the floor.

We left at 4:30 a.m. expecting the Mykonos town to behave like a typical sleepy town. And so wrong were we. The place was still rocking. Many shops, eateries, bars were still open. Crowd had thinned out but was still “thick” enough as we heard the music and endless loud chatter on the streets.

The gods must be crazy: Trip to Athens, Greece