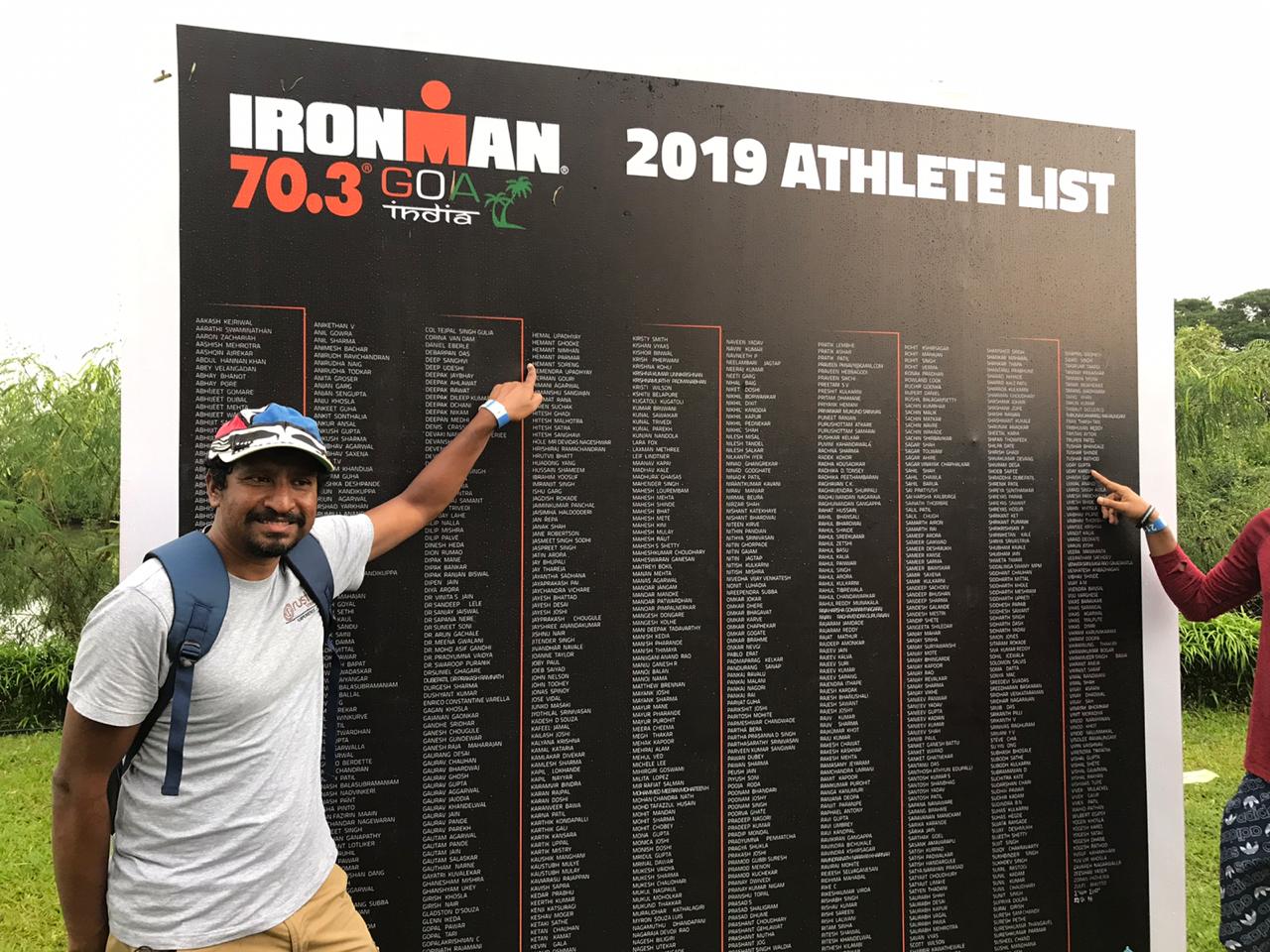 *Caution: Looooong read. To be read at the risk of getting tortured.*

“Normal is boring”. “Change begins out of your comfort zone” and more such take on nonconformity, unconventional living has defined my life (thanks to my suspected ADHD afflictions as well :)). And more so lately as I feel more and more liberated with each new activity or challenge I take up in life.

Ironman Triathlon was one such challenge I had in fact decided on almost a decade ago. But, at the time, with my unhealthy lifestyle and zero swimming skills I had no chance in the world.

Two years ago I started to learn how to swim mainly to pursue my new found passion of Scuba Diving and it just opened a new world altogether in the ocean. And when Ironman announced its entry in India last December I jumped at it and registered thinking I will be ready for it in 10 months in October.

How mistaken I was.

For someone, who has mainly relied on some good genes (physically) he was born with, this required months and months of relentless training that I have never done even during my “younger” active days.

So, with some training under the belt along with total lack of confidence I drove to Goa carrying my bike in an eventful journey with a flat tyre and stuff, but thats another story.

Two days before the Ironman Triathlon 70.3 in Goa, I went for a practise swim in the sea organised for the participants. It was my first time swimming in the open sea (without any life jackets or BCD – worn while scuba diving).

50 m into the sea as I reached the deep end I panicked big time, hyperventilating hung on to my dear life holding the buoy lines and took lifeguard’s help to get back to the beach.

I repeated exactly the same two times more unsuccessfully. All my practise in the swimming pool had come to nought. In the evening, dejected and despondent I had made up my mind to withdraw from the event.

We could hardly sleep the night before, tossing, turning and snoring. We eventually woke up really early to check in to the race. I had decided to give it a go as my swim yesterday was slightly better, but that was in better conditions. 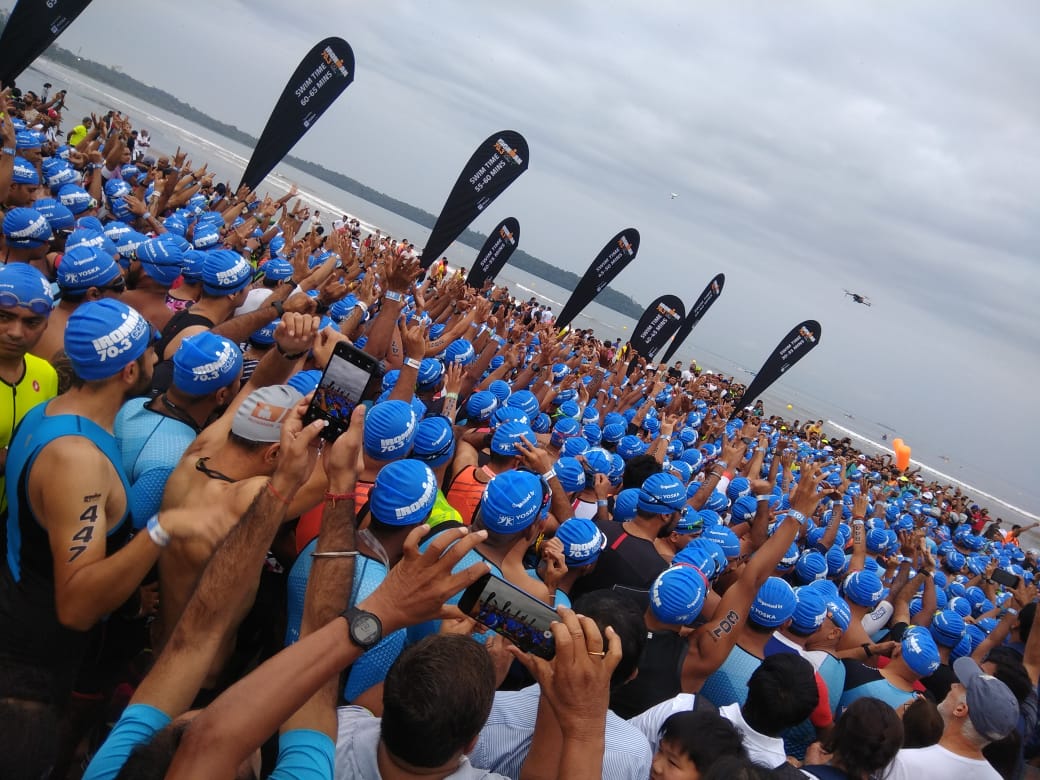 Today, the weather was overcast and cloudy having rained in the night. The sea was as choppy as ever. The race itself was pushed by half-hour with organisers hoping that conditions improve. I myself was hoping that they cancel the swimming section.

However, there was no turning back now, as the starting gun went off.

Soon, I found myself running into the sea along with other participants in waves, only to be pushed back by the actual waves from the sea. As I reached the deep end and my feet lost touch with the bottom a slight panic set in. At that very moment, I just told myself to be calm, remember the training in the pool and go very slow to get into the rhythm. 500 m into the swim I was confident and then at that very moment I felt a painful sting in my right arm. A painful electric shock ran through my entire body and I froze momentarily in the water.  It took me seconds to gather myself as I realised that I would drown if I don’t. I knew that I have been stung by a jellyfish. With 1400 m still to go I ignored the searing pain and swam on counting each stroke in sets of 10, 20, 30, 40…..akin to the steps I take on summit nights while climbing a peak. Taking each stroke/step at a time without thinking about how close or far the finish line is at. All the experience, training subconsciously came to forth as I eventually managed to complete 1.9 Km swim well within the cut-off time as I looked at my watch relieved, and I ran towards the medical tent for some treatment.

I knew I would lose some time here for treatment and transition, but with the biggest obstacle cleared, my mind was positive and body totally confident as for the next six odd hours in the hot and humid Goa weather I saddled onto the bike cycling relentlessly followed by a gruelling but strong run ignoring all pains and cramps (the new definition of self-torture).

As I made it through the finish line I literally stumbled and fell with excitement (and also because I was trying to be a bit acrobatic there 😀).

The word and event Ironman conjures imagery of toughness with above average endurance and physical strength.

But in reality that’s not entirely true.

Its the mental strength that gives you the start and takes you through the finish line. 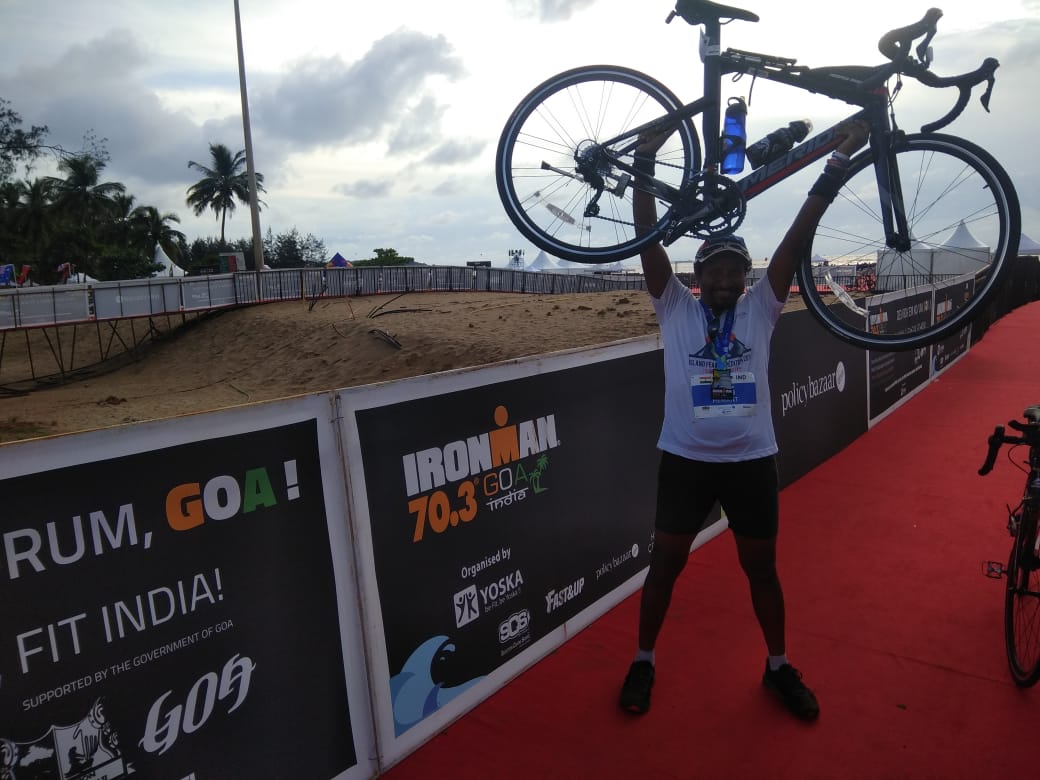 A big thanks to Pradeep my training partner-in-crime and a fellow masochist who also finished this gruelling race with flying colours. Without his constant company and encouragement I wouldn’t even have had registered for this. And to my friend Ranjit, our official photographer 😀 who came all the way to support us with his typical sceptical questioning look as to why are we inflicting all this pain onto us? But towards the end he too became a convert 🙂 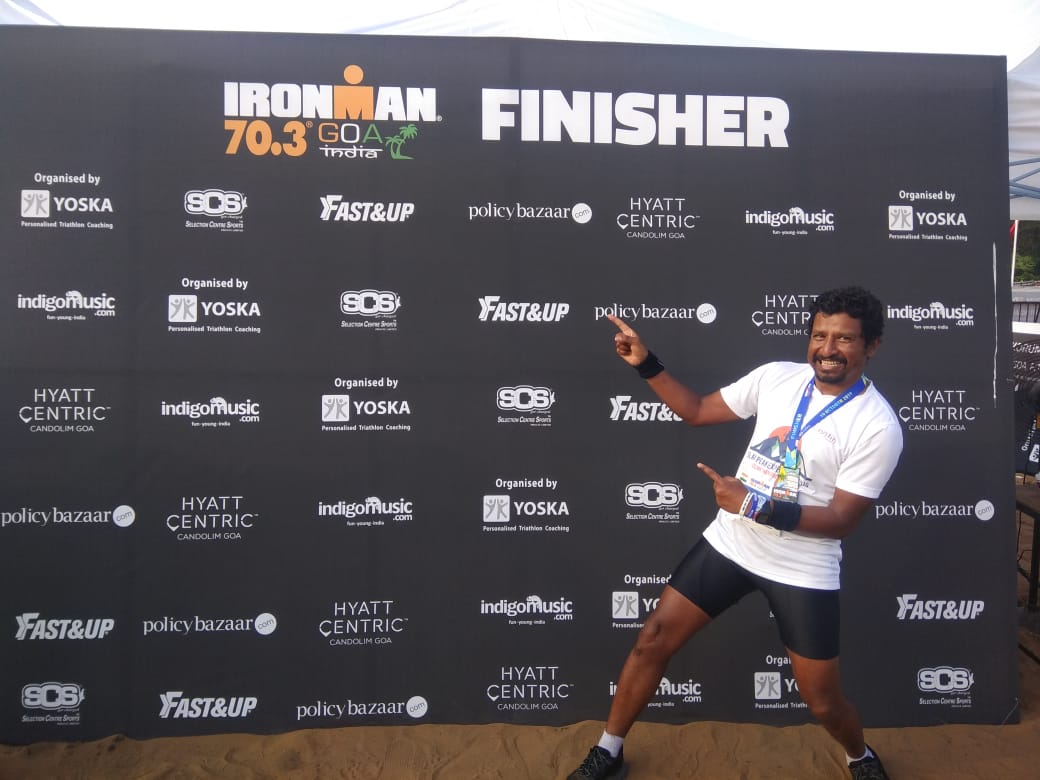