P. J. O’Rourke would’ve thought just that when he once said,

“Mankind has invested more than four million years of evolution in the attempt to avoid physical exertion. Bicycle riders would have us throw all this on the ash heap of history.”

Many adventure cycle fanatics from all around the world actually come to Ladakh (and many bring their own bikes) to do just that. They cycle gruelingly upto the top, Khardung La pass and then speed downhill back to Leh.

Well, since I had just climbed the daunting Stok Kangri peak standing 6137 m tall, couple of days ago, (which as you can calculate is higher than Khardung La), I thought why climb again and that too with a mechanical aid, read a bicycle.

So I rode downhill. (Though I was so tempted to put it down as “cycling uphill”. Which by the way, I saw folks doing.)

It all began after the successful Stok Kangri expedition, we had few extra days at Leh, before heading back to Bangalore. The first free day Aravind and George had decided to sign up for the downhill cycle ride. Now both of them are good bikers and sworn MTBers. (MTB – Mountain Bike). It looked tempting. After all, I too am a cycling enthusiast. But I am more of a roadie (road bike enthusiast). So, I decided to go for the white water river rafting on Zanskar, instead.

However, as a typical Libran, that I am, indecisive to the core, I changed my mind at the last moment decided to join them.

We reached the “bike shop” at 9 a.m. to be welcomed by a sea of MTBs of different colors (and frames) waiting for us bikers to ride them down. Trek and Merida brands dominated these MTBs. While Aravind and George chose Trek 3700, I went with a Merida after trying out many Treks.

Then began the long wait as many bikers (some 20 odd) turned up and tested their respective bikes. These were riders from different nationalities – Israel, Switzerland, Canada, France, Australia……

The plan was simple. We and the bikes would be driven up to the pass (it will take 2 hours to cover the distance of 40 km from Leh to Khardungla) and then we and the machine (the bike) would roll down back to Leh. Cycle mechanics would be accompanying with spare bikes, puncture kits etc. in case of any breakdowns. 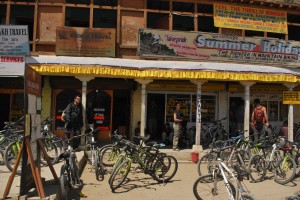 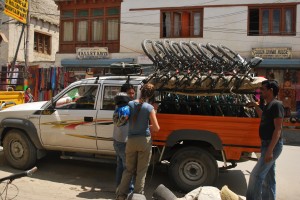 We waited for two hours as the bikes were packed in the mini trucks.

When the wait ended we were packed into the SUVs, actually an euphemism for the vehicle we were in. There were 9 of us in that vehicle.

And right at the first stop, after half an hour, George and Aravind moved to other relatively lesser packed vehicles. 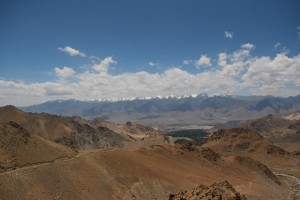 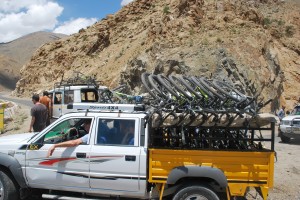 Next one and a half hour to the top was better. However, still not so good for someone who hates these diesel fumed gut wrenching rides on the mountains. However, the breathtaking views along the way compensated for the breath-stopping ride in the packed vehicle. With breaks in between for the bladder easing ritual and for capturing the amazing scenery views, we finally reached Khardung La.

George and Aravind reached a bit later as their respective “SUVs” had broken down. Apparently, the vehicle in which George was traveling was eventually fixed and driven up by a “crazy” Australian rider. So George already had an early dose of adrenaline. 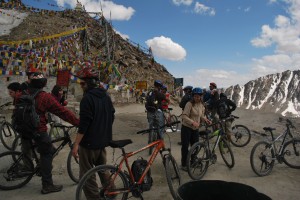 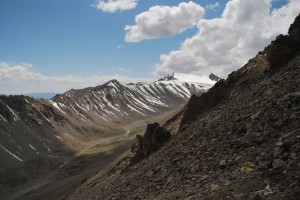 I tried to make do with a large dose of maggi soup instead, at the “highest cafeteria” in the world.

(Anything you do here could be conveniently prefixed with “highest”.) 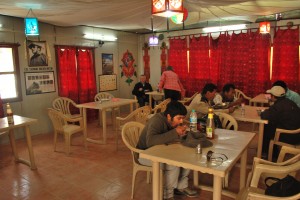 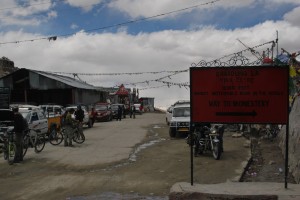 After the snaps with our bikes at the “highest” point we we were on our way down, the last ones to leave the top as other bikers had already sped down sometime back. 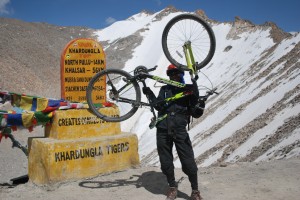 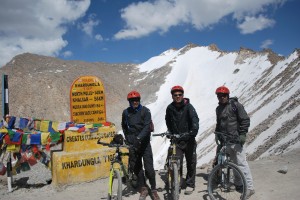 And boy, did we speed down too, as we overtook many of them on our way down. We rode in pelotons. We rode solo. As we looked down the road we saw riders cycling down in pelotons a la Tour de France.

The climb upto Khardung La was so steep now that we realized cycling down that more than pedaling, the skill was required to keep the balance, using the right mix of gears at various point downhill.

As we sped down, I saw the two MTBers come out in their true elements and they maneuvered the MTBs with great skill. While Aravind was the fastest, George was definitely the brashest as he took steepest of shortcuts in many a undiscovered dirt trails. I, the roadie, just followed them experiencing this cold high altitude ride laden with unending captivating mountain panorama all around. 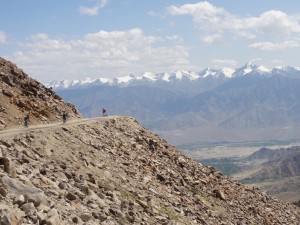 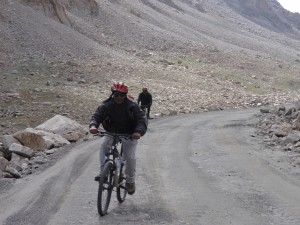 Mid-way in our ride to Leh, we met some folks from our expedition group riding up towards Khardung La in motorcycles. Motorcycling is another popular activity here in Ladakh and towards Khardung La as well. (Please ensure that you have permits to go to Khardung La, as our friends in mobikes discovered a bit late in the day.)

It took us around two hours (with enough “rest” breaks) to reach Leh. The fastest rider that day covered the distance in just 55 min. Well it was no race….it was just pure adrenaline.

This was an amazing journey (this time a ride) in Ladakh…cycling down Khardung La…a must do for everyone visiting Ladakh…a must do for all bikers…!!

As I write this post I am reminded of “Dynamic Equilibrium” I learned in school Physics, which again reminds me of my genius (middle) namesake, Albert Einstein, who once said,

“Life is like riding a bicycle – in order to keep your balance, you must keep moving.”

So, fellow bikers, keep on riding…and life will be one hell of a joyride!!

And in Ladakh, it will be accompanied with pure adrenaline!! 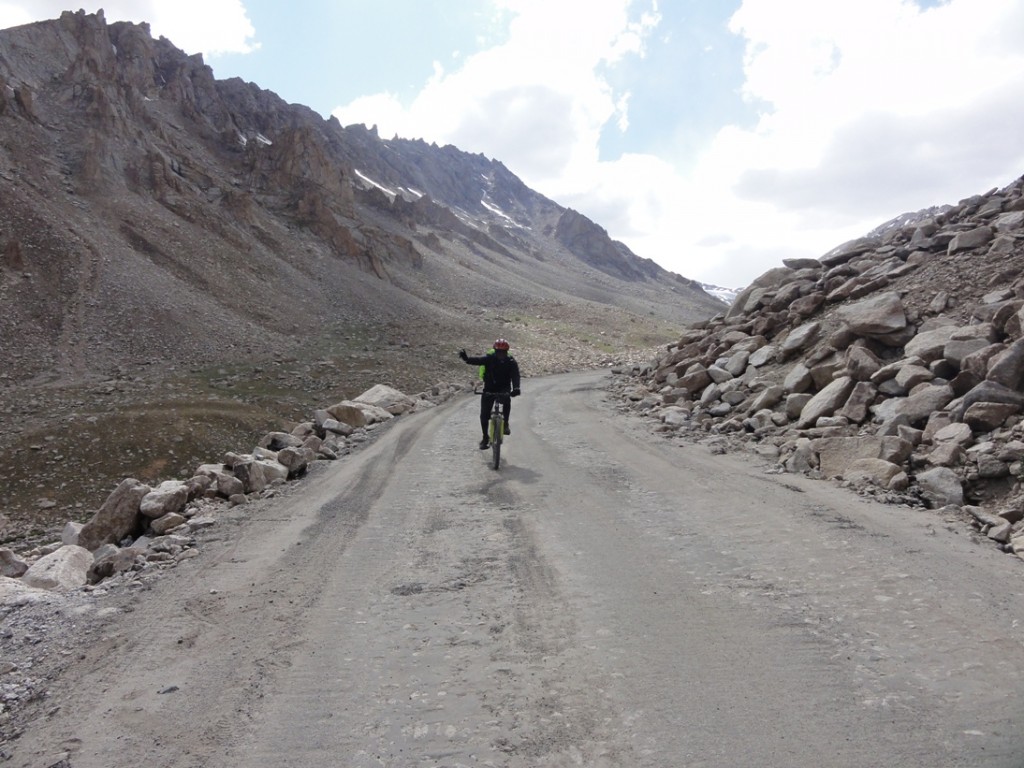