Kithulgala, October 2009. Sri Lanka, the pristinely beautiful island off the southern coast of the Indian subcontinent, earlier known as Ceylon and Serendip (much earlier), and just Lanka (much much earlier during the times of Ramayana.) Incidentally, the word “serendipity” stems from it “much earlier” name of Serendip.

However, any visitor to Sri Lanka would rush to its gorgeous beaches like that in Bentota (where I went some years ago), hang out in Colombo (which I did – esp. clothes shopping in Odel and checking out the various sights in the city like the Independence Memorial Hall among others), go to Adam’s peak, visit the Elephant orphanage, feel nature through the invigorating safaris and nature trails, experience the rich culture and religion (Buddhism) – the last four I have mentioned, none of which I did.

This small island of only 270 km long and 140 km wide has the most diverse activities one can do. One of them is white water river rafting (which I did).

As part of the office offsite the biggest surprise and highlight, at least for me, was this. After, half a day of sitting inside the air conditioned environs of the nonconference room discussing nonsensical corporate strategies, I could sense that everyone involved was yearning to get out. And soon we did as we romped on the beach resort in the evening accompanied by some cool cocktails and music.

However, the next day we made our way to the picturesque Kelani River in Kithulgala. It took us sometime to reach there as there was a roadblock, though we unnecessarily feared that there was an attack from LTTE. This was in the year 2009, during the height of the civil war between the Sri Lankan govt. and the rebel Tamil group, things are much calmer and peaceful now. It too us some four hours to reach the place instead of the usual two hours by bus. 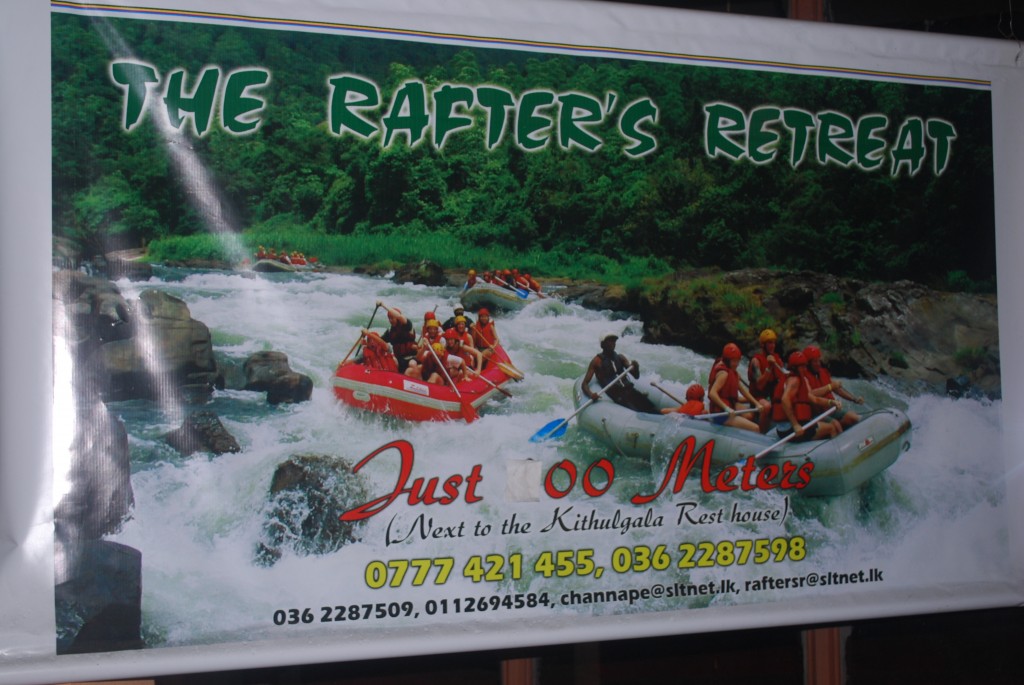 As soon as we checked into one of the many hotels there, we were welcomed by a large, stocky man with a braided pony tail. He owned most of the land there and was the one organizing the multiple river rafting expeditions for the amateur rafters like us.

Soon, we were ready with the safety jackets and helmets on, raring to raft the hell out of the rapids as one enthusiastic would be rafter commented.

The distance to be covered in the raft is 5 km with 5 major rapids and 4 minors rapids. We were in four boats. I was in a smaller one, which was big enough to seat 10 rowers. The eager wannabe rafters, us, that is, soon discovered how difficult it was as we struggled hard to row and keep the raft under control. Our raft toppled twice throwing us down to the depths of the river only to be pulled up again buoyantly by the Physics provided by the safety jacket. It was pure adrenaline as we manoeuvred at the rapids coupled with a feeling of fear when we thought we had almost drowned post toppling of the raft.

It was an exhilarating experience nevertheless. A must do for all adventure and even non-adventure tourists visiting Sri Lanka.